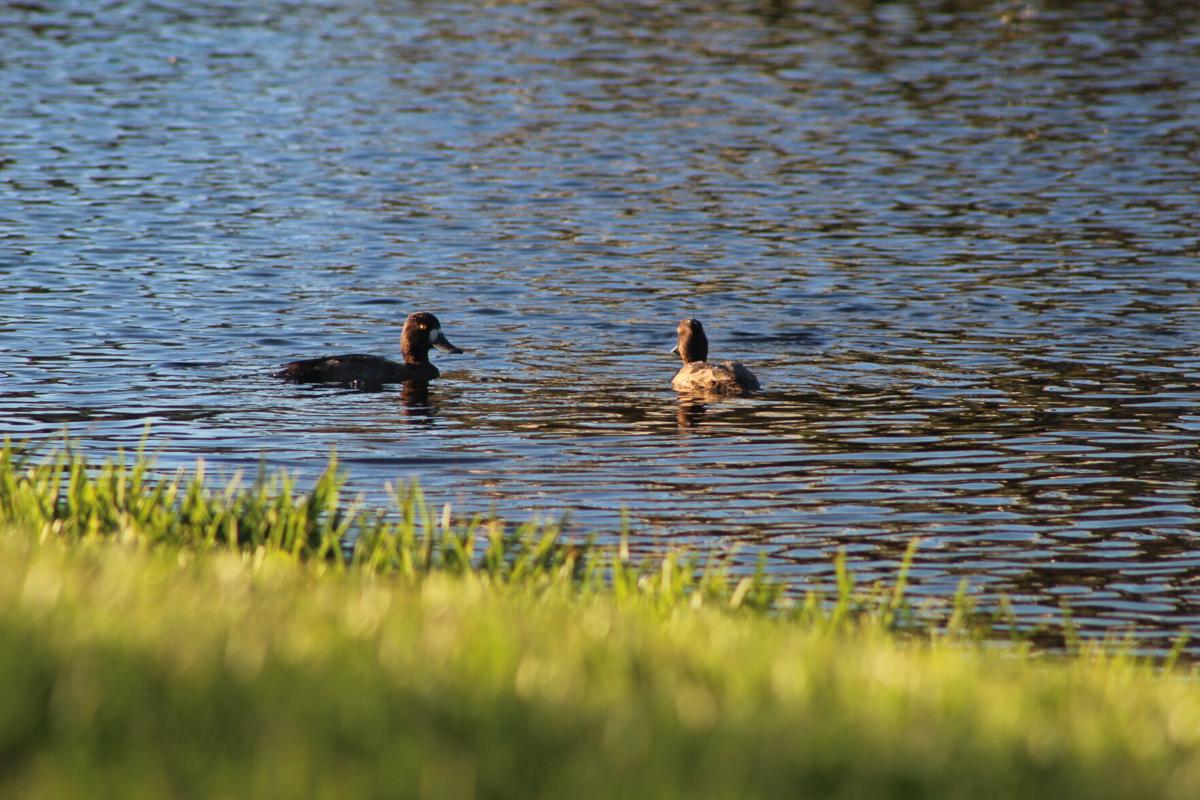 Lesser scaups spend their winters here on campus, until about mid-March. Students can see them foraging and wading in small groups, among the many other waterfowl that call campus home. 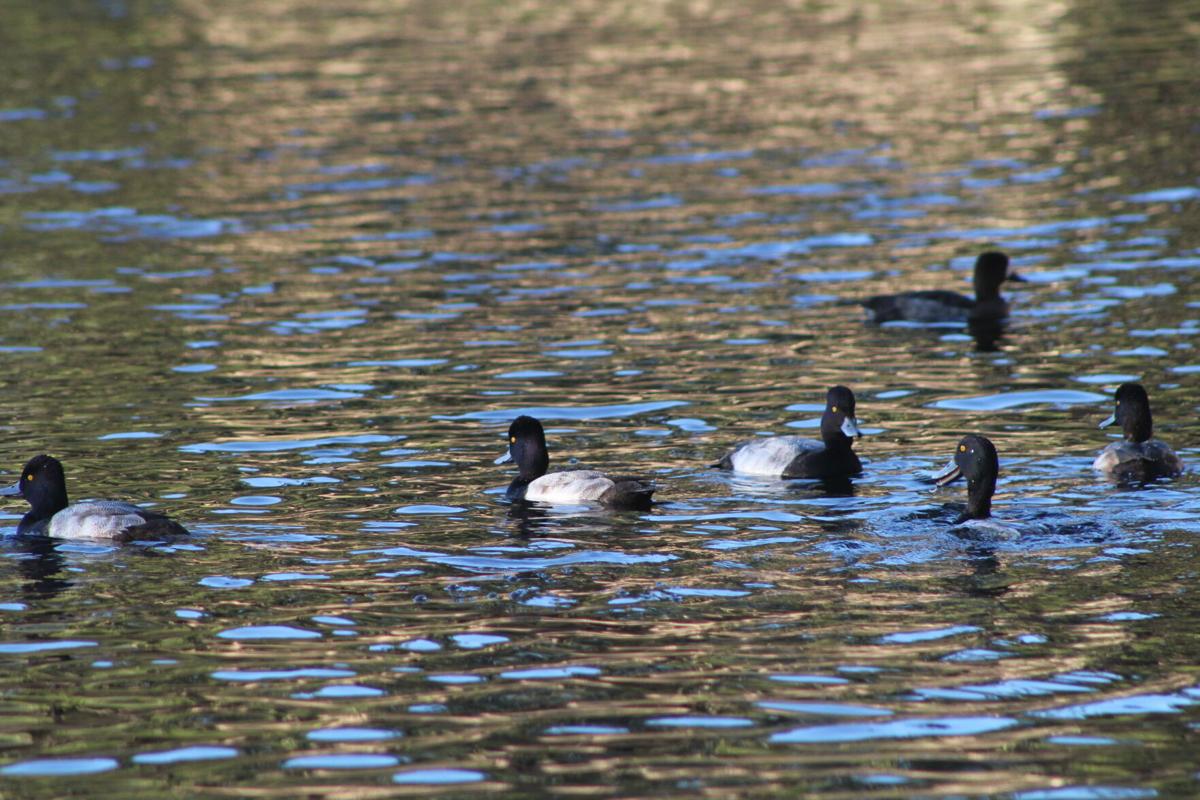 A group of male lesser scaups wades peacefully in a campus pond. They love to take shelter in these ponds, where there is less wind compared to the ocean where they also rest together.

Lesser scaups spend their winters here on campus, until about mid-March. Students can see them foraging and wading in small groups, among the many other waterfowl that call campus home.

A group of male lesser scaups wades peacefully in a campus pond. They love to take shelter in these ponds, where there is less wind compared to the ocean where they also rest together.

In January 2021, sophomore environmental studies and biology major Jayden Jech stood quietly on the edge of Fox Hall Pond, watching the birds peacefully float in the water. For his ornithology winter term course, he closely observed the birds on campus, taking surveys and writing down interesting behaviors he saw. All kinds of waterfowl flocked the pond, including herons, egrets, ducks, pelicans and more, all looking for morsels to feast on and a quiet place to rest.

He noticed an interesting-looking duck, which he identified as the lesser scaup, Aythya affinis, a migratory bird that visits Eckerd’s ponds from November to early March, with their migratory routes far-reaching across the U.S. and Canada.

“We're just a nice spot along the way for the winter,” Jech said.

But something caught his attention while watching the birds feed. Lesser scaups are diving ducks, so their entire bodies disappear underwater to forage, unlike typical mallards which stick their bottoms in the air to reach the plants they eat. Jech noticed that the females were typically the ones to initiate a dive, and then the male ducks followed.

He talked about this pattern with his ornithology course professor, Professor of Environmental Science & Biology Elizabeth Forys. Ornithology is the study of birds. She thought it was intriguing too, so they decided to begin a pilot study to learn more about this behavior in the lesser scaup.

“They are ducks, they like to be together, it's safety in numbers. So, they don't want to each be foraging on their own. They also learn from each other, where they're fishing, where there's food and stuff like that. So he wants to know basically is this behavior a female mediate, do females decide when and where to forage?” Forys said.

Jech has realized it is difficult to find other research and other data about the lesser scaup, though some studies have been done on ducks that are genetically similar.

“Because it's not a very well-studied topic, I was thinking there was an opportunity to develop something, and continue to promote research in the behavioral aspects of the species,” Jech said. “I feel like this research would be helpful in better understanding the lesser scaup with so little information.”

Most of the research articles Jech is finding about these ducks are from the 1990s. So, he and Forys think it is important to collect this data since the few studies about the ducks are from decades ago.

“You can do this kind of research very inexpensively. Natural history research really hasn't received as much attention the past 50 years and a lot of people are saying we still need that good data,” Forys said.

On Tuesday, Feb. 9, Forys and Jech emailed natural sciences majors, including environmental studies, animal studies, biology and marine science to recruit a team of students to help them with this project. Now, they have about 20 volunteers that take shifts to monitor the birds on a daily basis, writing down data about their behaviors to learn more about them.

“This is something anybody can do to get some experience and learn a bit. Anybody can identify the birds, [they] are really pretty iconic looking and so this would be a great way of finding out when they're active,” Forys said.

Lesser scaups, like many migratory birds, come to Eckerd’s campus, particularly the ponds, as a stopping place along their migratory routes. These birds also rest together in big “rafts,” a term for a large group of birds floating together in the water, out in the ocean along their migration paths. But Forys and Jech think they enjoy coming to our ponds for a break from the wind and to feed on the plentiful resources the ponds provide. Forys has seen them at Fox Pond and the pond near the front gate.

This species of diving duck is not endangered or threatened, but they are hunted by duck hunters. Forys said organizations and projects like the Duck Stamps have helped to keep their numbers at a stable rate.

“It is interesting how little is known about species that are not endangered, so understanding their behavior, group dynamics and things like that might be ultimately important for their conservation. Right now it's nice to see a species, where there are enough of them to study,” Forys said. “Not everything has been done about everything.”

Jech trained about 20 Eckerd students to conduct surveys on the lesser scaup, so they have at least one person watching the ducks everyday. They write down data about the ducks’ behavior, whether or not they are foraging and other environmental factors like the weather and time of day to see if these aspects may have any impacts on the ducks’ behavior.

“To identify these birds, they have bright-yellow eyes, so those stand out compared to others,” Jech said.

The students must distinguish between the male and xale lesser scaups to help Jech with his study. Males have a bright-green head and a white body, while females have a white ring on their bills and a brown body. Females can sometimes be confused with other duck species since their feathers are a brown typical of other ducks, but the yellow eyes are a helpful trait for identification.

While the lesser scaups are here for a short time, they do play important roles in their environment’s food web, according to Forys. They control the populations of the foraging items that they eat in the ponds, and the ducks themselves can be a food source for other larger birds of prey.

Jech and the volunteers will continue to monitor the behaviors of these ducks before they continue along their migratory routes. After this pilot study, Jech is excited to look at the data to see if he can turn this into a senior thesis or a longer research project.

“It's overall pretty neat, and it just started with a project from winter term, so it’s all kind of crazy like things can spiral into,” Jech said.