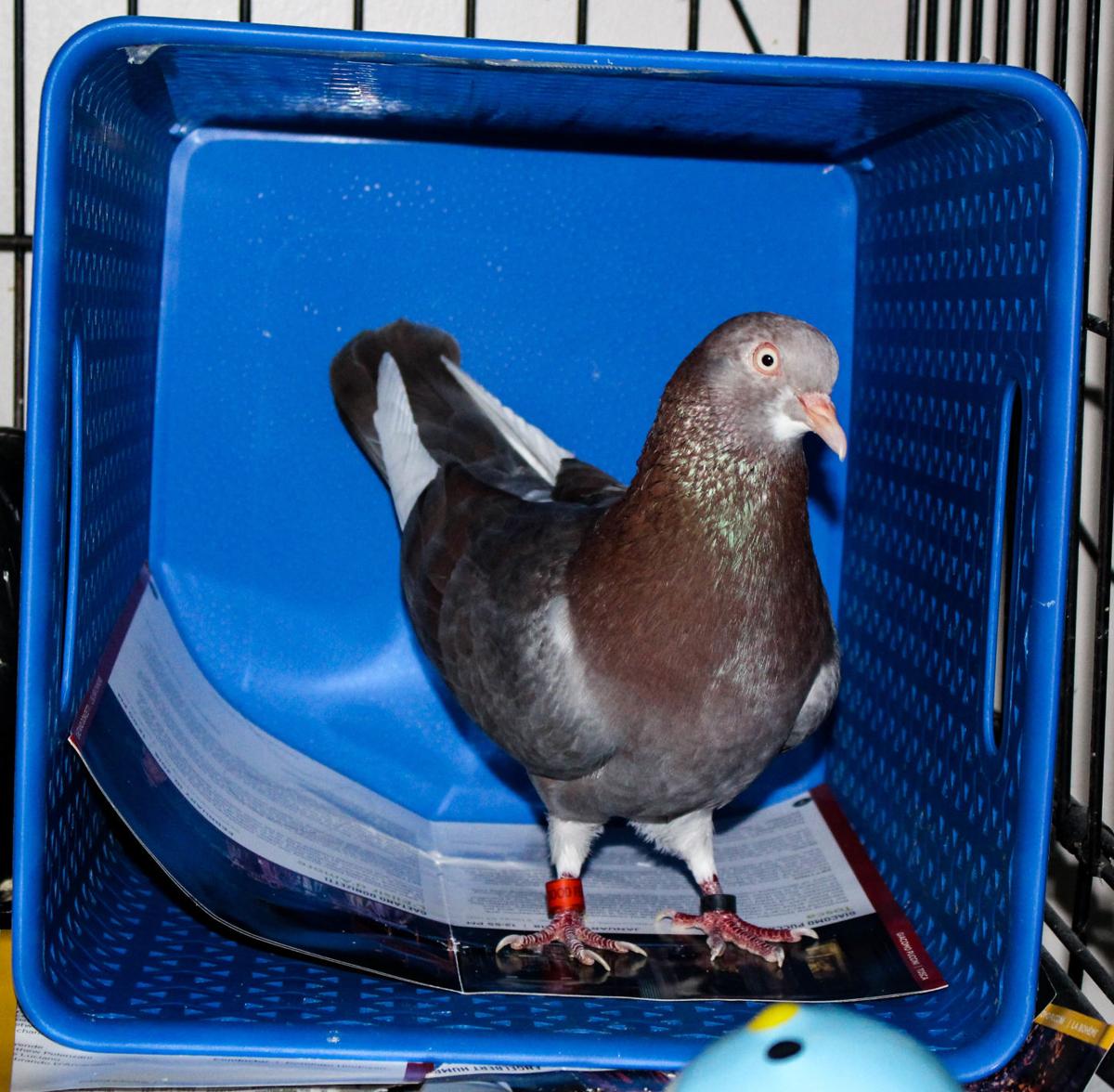 Ponniah often makes toys, like pinatas, entertain her pigeons. Hillary, pictured here, stands in one of his owner's boxes. 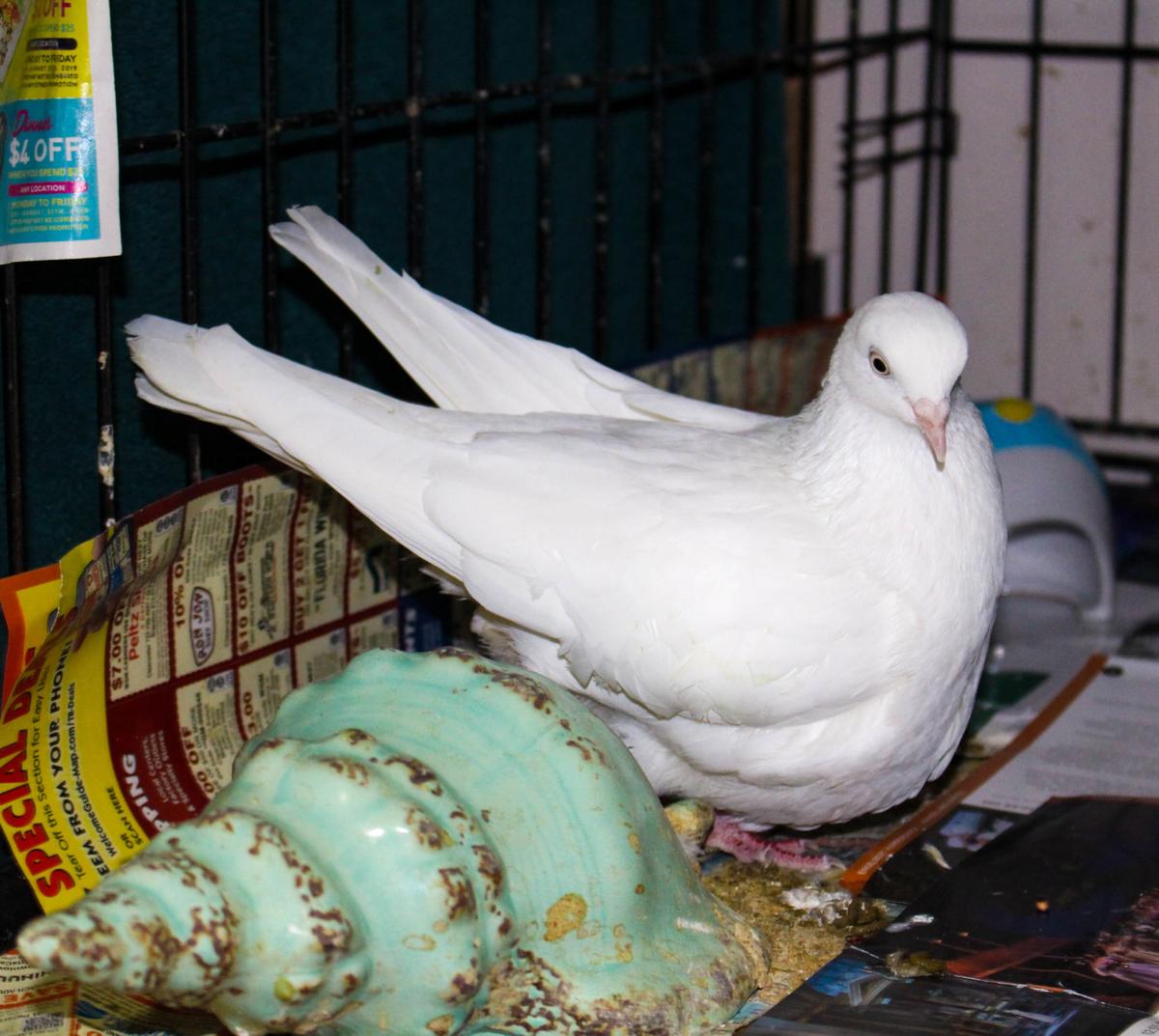 Rain poses for the camera. She is likely a former wedding 'dove'.

Ponniah often makes toys, like pinatas, entertain her pigeons. Hillary, pictured here, stands in one of his owner's boxes.

Rain poses for the camera. She is likely a former wedding 'dove'.

Hillary and Rain are both rescues from separate shelters. In 2016, Ponniah’s family adopted Hillary from a shelter in Maryland. Mistaken as a female originally, after naming him, Ponniah discovered he was male by using a technique called the mirror test.

“I put a big mirror in front of him and he was like ‘Hello!’, and then he didn’t stop for like three days,” Ponniah said.

Rain was adopted in January 2017 and was listed as a dove on the adoption website due to her white coloration.

With an ever-growing love for birds that began during high school while she was volunteering at a local zoo in her hometown, Ponniah first looked into getting a parrot. But while researching them, she realized that they were a bit too loud, lived far too long with a lifespan of 40-60 years and were too time-consuming for the college lifestyle. Instead, she found pigeons.

“Pigeons are smarter than people give them credit for, but they’re not as needy,” Ponniah said.

She explained that pigeons can be loving and affectionate, just like dogs, if raised around humans. But Hillary and Rain were not and are thus much more affectionate with each other than they are with her. Socialization is very slow and often restricts what she can do with her birds as their bonds with one another grow over time.

“They’re kind of like a feathery fish tank,” Ponniah said. “They are something I admire more than something that I interact with fully because building up their trust is a matter of patience and a lot of time to devote.”

As a result, Ponniah spends much of her time finding new and fun ways to continue building bonds with them both while keeping them properly stimulated.

This includes enrichment activities and toys, like feeder puzzles and piñatas, which Ponniah makes herself. To entice them, Ponniah uses mung beans, safflower seeds and green peas as special treats in contrast to the pigeon seed and grit which she feeds them daily.

“They are not exactly easy and the biggest challenge is finding the right resources for them,” Ponniah said.

In addition to being messy and somewhat loud, Ponniah finds that it is very difficult to find proper sources about caring for pigeons as pets. Most information she finds is about parrots or racing pigeons, neither of which suits her needs.

Ponniah has dedicated time and energy into assuring she is a responsible pet owner for her pigeons. She has a message for the Eckerd community.

“Yes, they are super cool, but do be aware that they can be a lot of work. Please do take care of your pets and do your research,” Ponniah said.