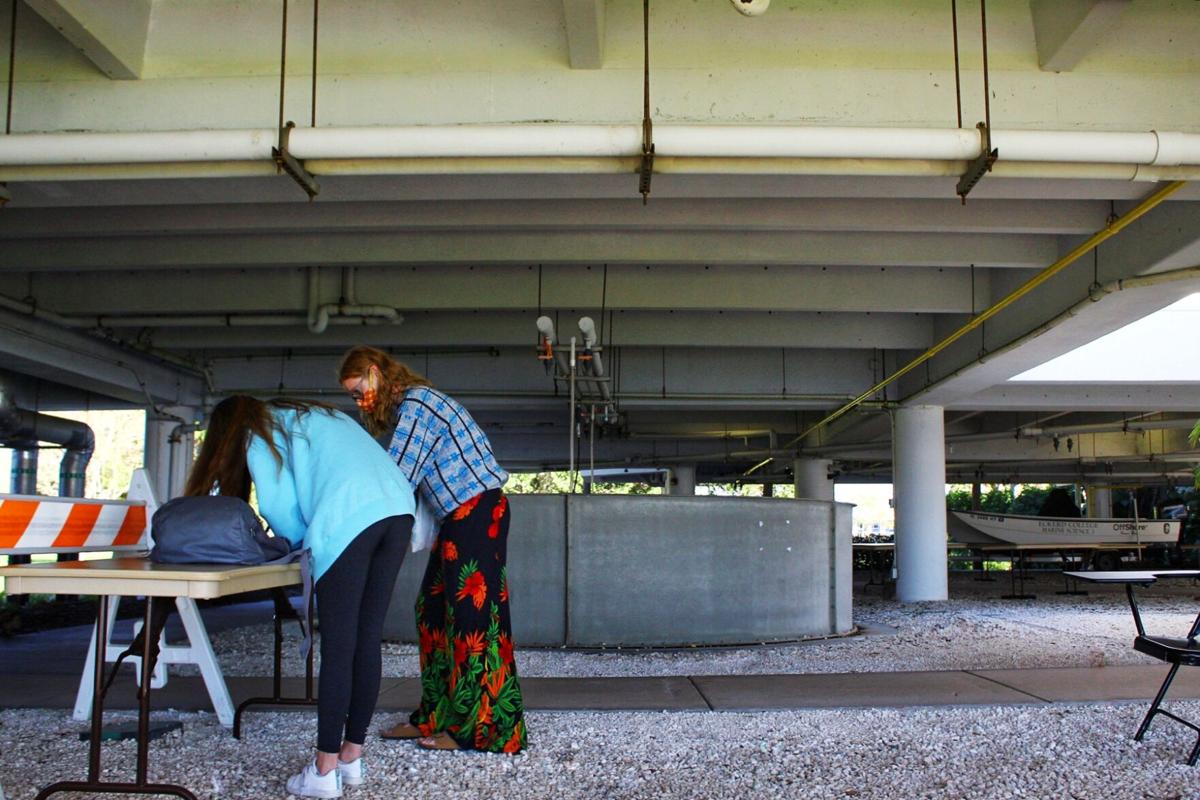 Sophomore Isabel Moyer and sophomore Dylan Davidoff work on their horseshoe crab research. This is underneath Galbraith Marine Science Laboratory. 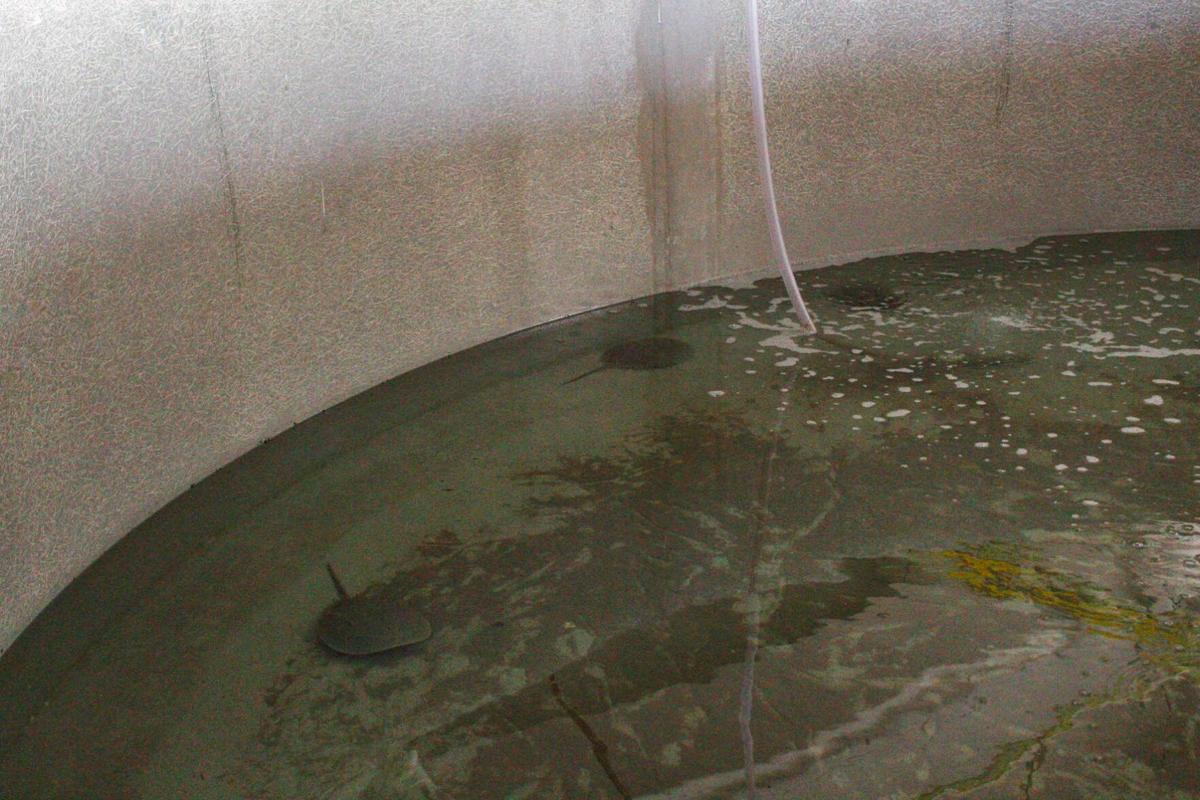 Two horseshoe crabs in the research. The names include Olly, Mateo, Leon and Herold. 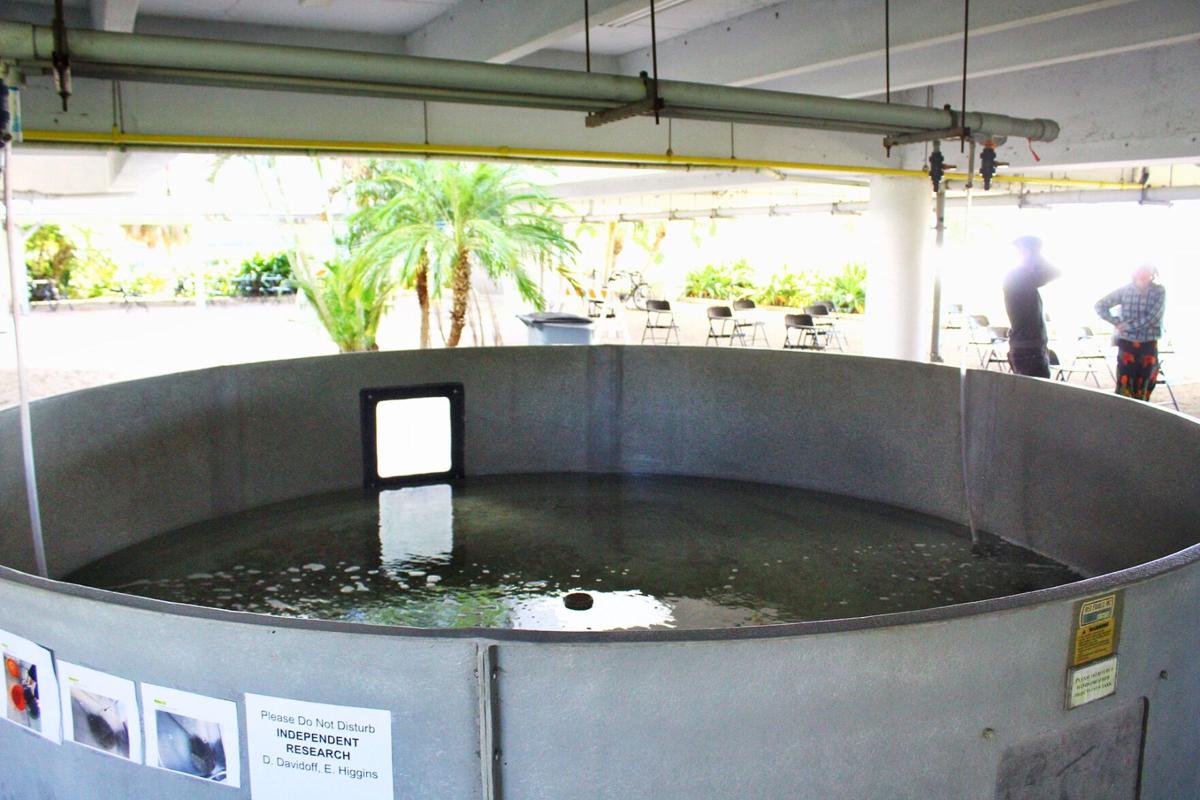 The tank underneath Galbraith Marine Science Laboratory. The area is open to students and other members of the Eckerd community.

Back in Block 2, students began to see funky creatures in the big tanks under Galbraith Marine Science Laboratory. After being unused for years, the tanks are now home to horseshoe crabs for a classical conditioning experiment started by sophomore Dylan Davidoff.

“Now I love horseshoe crabs with all my heart, like I think they're so cool and so underrated,” Davidoff said.

The infamous Pavlov classical conditioning experiment inspired the study, in which dogs were fed while a sound was made, then once the food was taken away and the sound was made, the dogs salivated since they had been conditioned to the two behaviors together.

Instead of using feeding, Davidoff looks at the mating behavior of the crabs. Horseshoe crabs mate by a male attaching to the back of a female. The female swims up to the shoreline, then buries herself in the sand where she deposits eggs that the attached male then fertilizes. According to Higgins, a female can lay 60,000 to 80,000 eggs, but only one or two will survive.

“It was really important to me that we'd pull off behaviors that we see in the wild,” Davidoff said.

“Intelligence testing like this would be a big leap in our understanding, because we just know so little about their behavior,” Higgins said.

This experiment is technically double conditioning. So, she uses the unconditioned stimulus, the female, and the unconditioned response, attachment. But, in this case they use a fake female, a female’s exoskeleton filled with cement. Then she pairs that with a neutral stimulus, in this case the sound of a metal pole being hit under the water, and a visual stimulus, part of a box that the female sits on. The conditioned response would be that the male would attempt to attach once they hear that sound.

The researchers currently have three crabs that they are working with, though they used to have eight. They released some of the crabs that were not doing well in captivity. They treat each crab as an individual, since they are all different and have their own personalities.

All of them have names as well, some of which included Olly, Mateo, Leon and Herold. Now they have two males, Wyatt and Clifford, and one female, Berkeley, which is being used for other behavioral data.

“I also name them all because it was important to me that they weren't just numbers and statistics,” Davidoff said. “And so just giving something a name is very human.”

All of them are males, and they looked for cute baby male names in order to find the right one.

Davidoff and a few other volunteer research students collect data every weekday in the afternoons. They record the horseshoe crabs’ behaviors, like swimming or resting, and their response to the stimuli. She definitely wants the Eckerd community to be aware of her project.

“I was a little nervous about keeping them up in the tank for everyone to see,” Davidoff said. “So on the tank there's their picture and it has their names, so people can kind of interact with it a little bit more and not necessarily like, ‘Oh, what are these random things in here?’ [but instead] ‘Oh, I think this one's name is that one’ and interact a little bit more without disturbing them.”

They captured the crabs from a beach on Fort De Soto, where Higgins and other Eckerd students have been monitoring their breeding since 2016.

Based on the data collected, the crabs’ peak breeding season is in October here in Florida, in contrast to horseshoe crabs in the northeast which breed in late spring. Higgins and another Eckerd student, senior marine science major Benjamin Shirey, are wondering if the crabs around here are a separate subspecies.

“Their behavior and other things about the population here are so different, so we really have a very kind of special population here on the west coast of Florida,” Higgins said.

Horseshoe crabs are unique in that they have been around for hundreds of millions of years, roaming the Earth with the dinosaurs.

“One of the biggest reasons why this is [is] intelligence, and everything is really interesting to be studying is because of the success of these organisms, trying to understand how they could have done that. How they could be successful through all of that without even changing form,” Higgins said.

According to Higgins and National Geographic, they have survived more than 350 million years, three major mass extinctions and the tectonic movements that created the continents from Pangea.

“We like to give ourselves a lot of credit, but humans have been on here for only a tiny, tiny fraction of the time that horseshoe crabs have. They are really, if anything on this earth is, sort of the pinnacle of evolution,” Higgins said.

Ecologically, horseshoe crabs have special properties in blood that can be used for medicinal purposes, and humans have harvested them intensely.

According to Higgins, it is not technically their blood, but their immune system. They are extremely sensitive to bacteria, so the horseshoe crab cells are used to sterilize medical equipment for both doctors and veterinarians. The product is called limulus amebocyte lysate. So, horseshoe crabs have contributed to fighting COVID-19.

“All the treatments of all the patients being used in all of those cases, pretty much everyone in America's lives have been saved by horseshoe crabs’ immune systems,” Higgins said.

Davidoff recognizes the importance of these critters, and she wants to protect them.

“They look so different from us, it's hard for people to connect with them. So using learning experiments or behavior or individual difference and showing personality in these creatures and organisms can better help people who don't really have the same love or connection to studying animals like me,” Davidoff said.

Also, the Institutional Animal Care and Use Committee (IACUC) does not have many regulations for protecting invertebrates like horseshoe crabs in laboratory experiments by scientists. Davidoff hopes to change that.

“Invertebrates are just as cool as vertebrates, and that's coming from somebody who's been in love with dolphins since I don't even know how long,” Davidoff said.

She’s hoping to share the information that she collects to the Fort De Soto park rangers, legislators, lawmakers and the general public so that they can better protect their nesting habitat.

“At the end of the day, I just want to share the knowledge that I have the privilege to discover or observe,” Davidoff said.