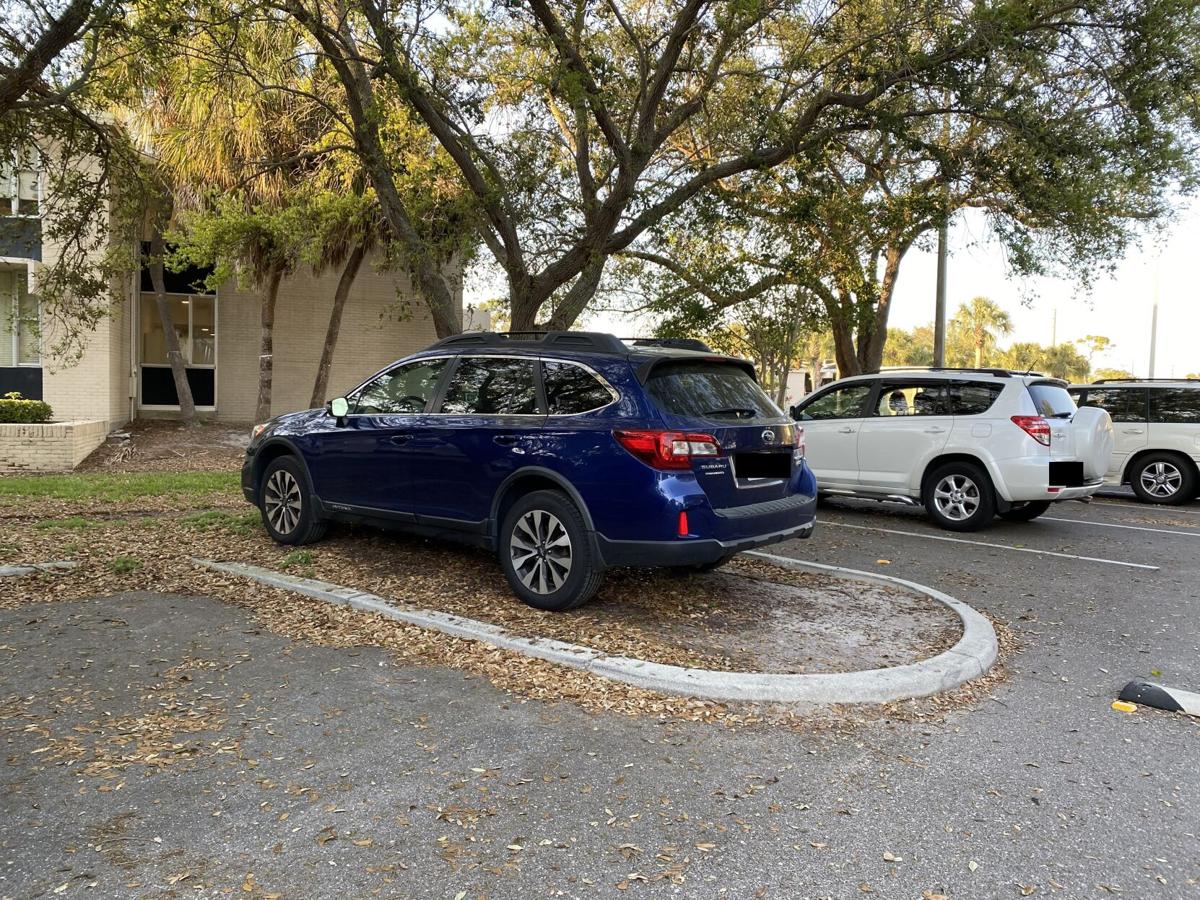 One example of how people have gotten creative due to the parking problems. License plates have been blurred for the privacy of the owners. 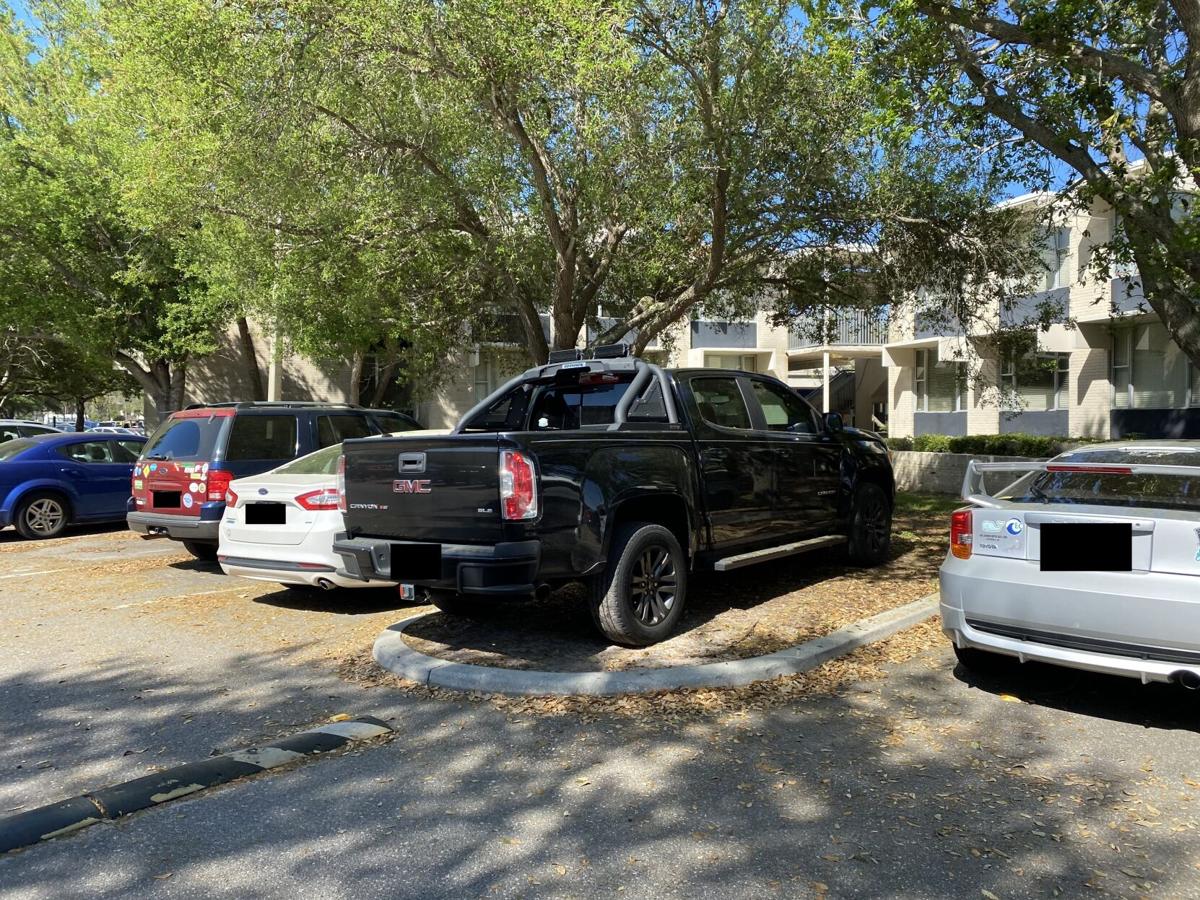 Another car getting creative with parking. License plates have been blurred for the privacy of the owners.

One example of how people have gotten creative due to the parking problems. License plates have been blurred for the privacy of the owners.

Another car getting creative with parking. License plates have been blurred for the privacy of the owners.

It’s 8 p.m. and you’ve just returned from a trip to Walmart. After showing your ID to campus safety, you drive around the roundabout and down Avenue of States. You reach the parking lot bordered by Omega, Nu, Iota, Epsilon and Delta. The speed bumps are not your prime concern, however. As you drive around the parking lot not once, not twice, but multiple times, you finally give up.

That’s right folks, today we’re going to talk about parking on campus. It seems like every time I pull onto campus my concern immediately becomes whether or not I will find parking close to my dorm. And I’m not alone. A poll published on The Current’s Instagram story on March 4 found that, out of 126 responses, 61% of students responded “It’s terrible and I hate it” to the three-question poll in regards to how they felt about parking on campus. Another 32% responded with “It’s bad sometimes but it's bearable” and the remaining 7% said that they found no serious problem with the current parking situation.

I, for one, have been displeased and annoyed with parking on campus. Late at night is the worst. When pulling into the parking lot by Nu and Omega, after circling around a couple times with no success, I have to drive all the way to the other side of campus to try to find a spot in the Kappa lot. Here, I rarely find a spot and usually end up parking in the gravel near Lewis House, which is referred to as West Lot. The reasons behind this horrific parking situation vary, but there are a couple that dominate.

Junior Bella Sounders was one of many students that responded to the open-ended part of the March 4 Instagram poll. The question stated, “Have you recently had a particularly annoying parking experience?”

“Yes. Freshmen keep parking wherever they want and are not ticketed,” Sounders wrote in the poll.

First-years in upperclassmen parking seems to be a common theme. According to Director of Campus Safety and Security Tonya Womack, this is a concern she has been hearing. However, she expresses that emails are sent out every so often to remind students where they can or cannot park. The most recent of these emails was sent out on Jan. 13, which gives a list of rules for where first-year students can park.

“All individuals with a First Year or Commuter parking decal must park in the first year/commuter lots- North Lot (located next to MacArthur Gym); West Lot (located across from Lewis House), and South Lot (located near the Waterfront boat yard). Additional first year parking spots are available on the northside of West Lodge parallel to 54th Avenue,” the email states.

Womack also said that when students are given their parking decals, the rules are made clear.

“Any time I’ve issued a decal to students, especially if they’re a first-year student or commuter, I say, ‘Make sure you park in the right lot, or else you get a parking ticket,’” Womack said.

Parking decals are given to students who register cars, and there are two main colors of decals. This year, first-years have a yellow decal. This makes it easy for campus safety officers to see where first-year students park and if they are parked in the correct spots.

“So if they don’t park in those spots, it’s a high-dollar parking ticket,” Womack said.

The amount of these fees ranges from $50 for parking in a loading zone to $250 for parking in a disabled space. The most common fee is $100, which would be charged to a first year who does not park in their assigned lots. Womack said that these fees are explicitly stated in the emails about parking, such as the one sent Jan. 13.

Womack also states that there is no difference between where sophomores, juniors and seniors can park. They are all considered “upperclassmen” and can park in any lot.

Well, from what I’ve experienced, there are a lot of yellow decals in the Omega/Nu/Iota and Kappa lots. Sometimes they have tickets, sometimes they don’t. I think most of us can agree that issues like this make our stressful college lives just that more stressful.

All I’m going to say is when I was a first year, my friends and I would park in the West Lot by the Lewis House like we were supposed to. Was the walk enjoyable in the heat of the afternoon? No. But it’s something you have to deal with as a first year.

When the lots are full, people tend to get a bit creative with how they park their cars. I’ve seen Jeeps and Subarus parked on medians, trucks parked directly in front of Omega and cars parked in front of the trash cans.

There are also some other issues that have been coming up more and more frequently. Aside from parking in fire lanes, spots that aren’t even parking spots, and more, there are gas-powered cars resorting to parking in the electric car charging stations.

Sophomore Joe Salcedo has had this issue multiple times.

“I drive an electric car and need to plug in and actually go places,” Salcedo said in his response to our Instagram poll. “People with gas cars keep on parking in the electric spot and then I cannot charge my car.”

If you have a gas car and park in a spot designated for electric cars, preventing people from charging their cars, then you must really hate the environment.

And yes, students can park in faculty spots, but only during certain times.

All faculty lots are off limits Monday through Friday, 7:30 a.m. to 5 p.m, according to Womack.

“So if you get up at 7:15 [a.m.] and move your car, you’re good. But you can run the risk of getting a parking ticket if you’re in a faculty and staff lot,” Womack said.

This means that, between the hours of 5 p.m. and 7:30 a.m. on weekdays, you can park in faculty spots. Weekends, as well, are fair game for faculty spots.

I’m not saying that these issues will be resolved overnight, but it can be fixed in a short amount of time. The solution is simple: educate yourself on where you can and cannot park, and do so accordingly. For the sake of making everyone on campus’ lives a little simpler, let’s just all park correctly.

Carter is a sophomore majoring in Environmental Studies and Spanish with a minor in Journalism.