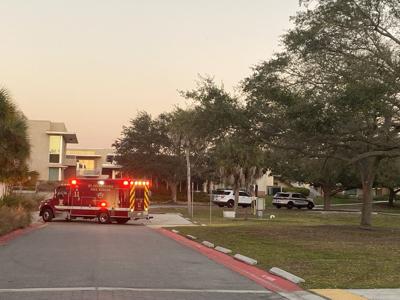 On Thursday, Feb. 3 students spotted police officers and ambulances outside Iota and Kappa, leading to concerns from the student body about the incident and their safety. In Iota Wittner, Eli Altman Johnson, 23, was arrested after he allegedly made a threat of violence towards an off-campus individual, according to an email from Adam Colby Friday, Feb 4.

According to the St. Petersburg Police Department Incident/Investigation Report, police received notice of Johnson’s alleged written threats to kill and do bodily harm from the victim on Feb. 3. St. Petersburg police officers notified Eckerd College Campus Safety to stay with Johnson until they arrived on the scene.

Johnson attempted to purchase a weapon but was waiting the mandatory 72-hour waiting period and did not have possession of it, according to the St Petersburg Police Department’s press release on Feb. 4.

According to Florida Statute 790.065, during this waiting period records are pulled on the purchaser and if there is any indication of arrest or indictment, they will be further looked into before approval and license for a weapon.

The Feb. 4 email from Eckerd College Emergency Alerts said he was charged with written or electronic threats to kill, do bodily injury, or conduct a mass shooting or an act of terrorism. This is a felony and Johnson was in custody with a $10,000 bond. His access to campus was also revoked.

Resident Advisors received an email on Feb. 3 at 9 p.m. regarding Johnson, asking them to call Campus Safety if they spotted him on the premises. The St. Petersburg Police Department described Johnson as a 5-foot-11, 200-pound, white male with blond hair, brown eyes and a butterfly tattoo on the right side of his neck.

Johnson was released on bail on Friday, Feb. 4 and is currently awaiting trial. He is still not allowed on Eckerd’s campus.

In an email sent out later on Feb. 4, Assistant Vice President for Operations and Management Adam Colby said there will be supplemental security on campus by SPPD off-duty officers. There will also be more thorough ID checks at the front gate for anyone entering campus. Head of Campus Safety and Security Dan Wilcox was not available for comment.

“Eckerd College remains committed to full cooperation with the St. Petersburg Police Department, the lead investigator on this case,” Assistant Vice President for Communications Robbyn Hopewell said in an email.

Johnson was taken into custody on Feb. 3 in Iota Wittner where he resided when other residents heard the situation outside of their dorms, including sophomore Ben Stolarczyk.

Stolarczyk was in his room when Campus Safety came to detain Johnson. He said they were trying to get him out of his room.

“He wasn't exactly complying and the campus officers weren't exactly nice about it,” Stolarczyk said.

When the officers got there, Stolarczyk said they were trying to see if Johnson was responsive. He heard the officers say he swallowed around 60 triazolam, a kind of sleeping pill.

Stolarczyk said he was scared because he expected better from Johnson, someone he might consider a friend.

“You don't want to see someone be self-destructive. That hurts,” Stolarczyk said. “He hurt himself and the people around him and a lot of his opportunities for the future.”

Sophomore and Iota Wittner resident Julia Bennet opened the door to her room on Thursday to find several police officers, and Johnson handcuffed, in the hallway.

“As long as I live in this room, I'm gonna open the door and see that, that's in my brain forever,” Bennet said.

Bennet said that several people on their floor struggle with anxiety and chose to live in Wittner for the medical singles.

“I called my parents and said [their cat] Olivia and I are fine, but I was shaking and my heart was racing,” Bennet said. “They had to do it right in front of my room which was kind of annoying.”

Bennet said Eckerd students don't feel the need to lock their doors, that they are safe not doing so.

“It’s scary to see all this violence in the end. You don't think it can happen to the campus. You think your campus is safe,” Bennet said.

Associate Dean for Counseling, Health, and Wellness Services Amy Falvo sent out an email to students on Feb. 4 about support services. If any student needs resources during this time, they are encouraged to reach out to Outreach Services, Counseling Services or Religious Life.