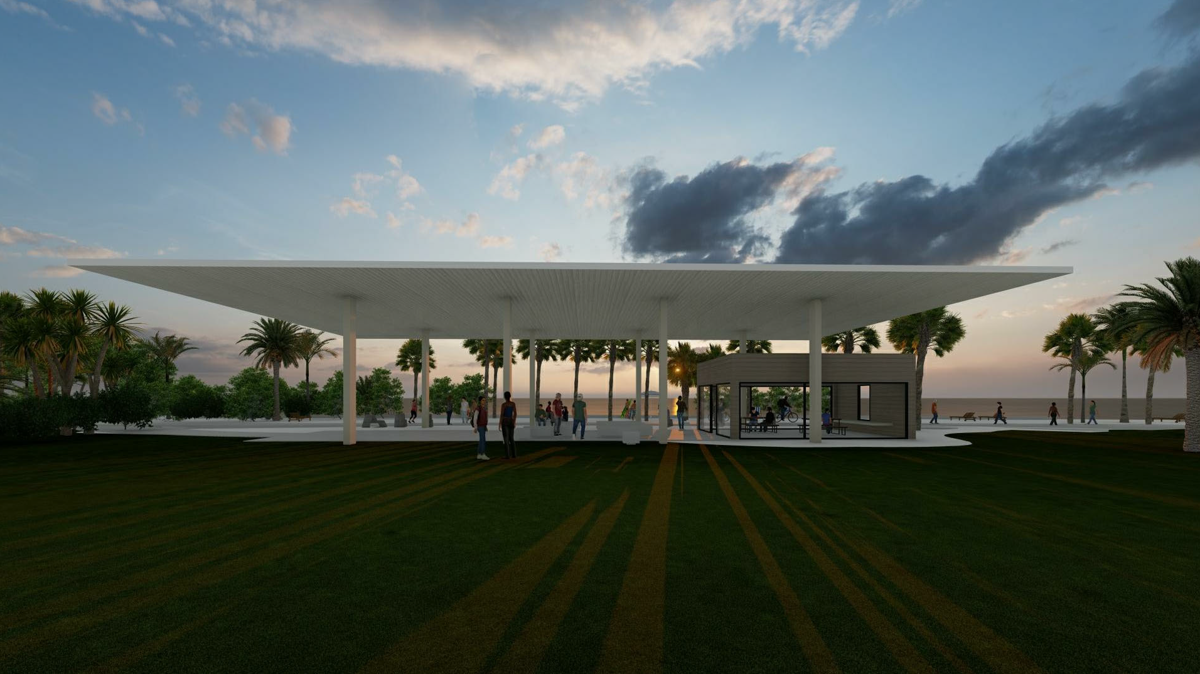 Recent sketches of the proposed pavilion design. The sketches include the design for the covered area, the screened-in porch and the solar panels. 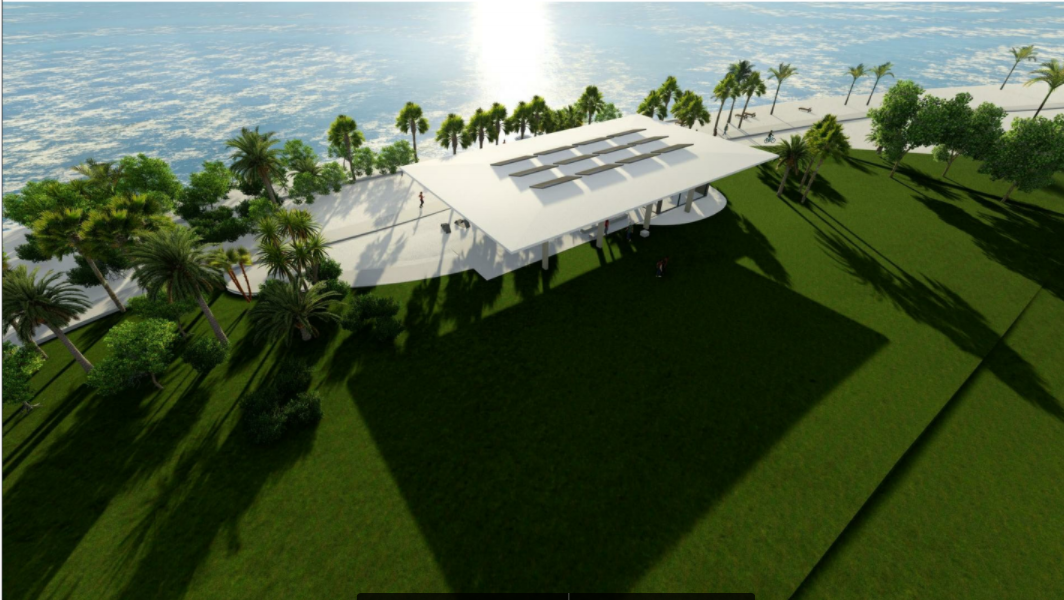 Aerial view of the proposed plans for the new Eckerd South Beach pavilion. The College hopes to start construction in fall 2021 and have the grand reveal before commencement in May 2022.

Recent sketches of the proposed pavilion design. The sketches include the design for the covered area, the screened-in porch and the solar panels.

Aerial view of the proposed plans for the new Eckerd South Beach pavilion. The College hopes to start construction in fall 2021 and have the grand reveal before commencement in May 2022.

The current pavilion on South Beach is a 2,000 square foot wooden structure. It has a roof, but is otherwise a completely open space with room for a few picnic tables underneath it. Right now, it is occasionally used for workout classes, DJing music and other outdoor activities.

The new pavilion is projected to be about 6,000 square feet of covered space, and will include solar panels on the roof. It will be made out of concrete and will be three times as large as the current one, including a screened-in porch for people to avoid bugs or the scorching sun during a hot day on the beach.

The space is intended to allow students and faculty to host more events and functions on the beach such as dinners, club meetings or outdoor classes. The shaded space will include Wi-Fi, electrical power and outlets so it can be used for a bigger variety of activities.

Despite its size, the goal is to have the pavilion enhance the landscape of the sand, water and grass at South Beach instead of overshadowing it. The pillars of the Scovanner pavilion will be spaced out so sunlight can still shine through, maintaining the picturesque view of South Beach from the academic side of campus.

“We want to make sure that we’re not prohibiting any sort of views from the field or to the sunset,” Sweet Sparkman Project Manager Matthew Ferguson said.

The pavilion will not take up any space that is currently being used on Kappa Field for soccer and rugby practices, and will blend into the current structure of the field, sidewalk, sand and water.

Ferguson hopes the area will bridge the gap between the beach and the pavilion.

In December 2020, focus groups made up of Sweet Sparkman architects, administrators, faculty and students met to discuss the beginnings of the project, and the idea was approved by the Board of Trustees in February 2021 to work on the design and the concept. In early April, another group of faculty and students were able to give input on the design before completing the “schematic design” phase.

According to Ferguson, he is planning on meeting with Eckerd’s Project Manager Shawn Wilson, the facilities department, the IT department and Vice President of Operations Adam Colby so members of the community can be as involved in the project as possible.

Ferguson said, “It’s really for you guys, so I’m super happy to have students involved in the project. That’s really the most important thing, which is why we’re meeting with everyone to get all that feedback.”

One thing that will be useful to students is the possibility of having power in the pavilion to increase the flexibility of the space.

“They know they need enough power for a small band or DJ to play, or for radios and speakers, but the lighting will be nice as well,” Assistant Dean of Students Fred Sabota said.

To further Eckerd’s mission to build a more sustainable future, the power will be derived from some solar panels on the roof that will harness energy from the sun.

With the pavilion close to the water, one goal the planning committee has to keep in mind is the impact of the lighting on marine wildlife.

“We’re being very conscious of sea life, so it’s the right kind of lighting that fits the area. But that’s part of the end of the weeds we haven’t gotten to yet,” Sabota said.

There are still many other steps of the process to be completed before students will start to see construction. Ferguson confirmed that while the project is currently in the design phase, they hope to start construction in fall 2021 and have the grand reveal before commencement in May 2022.

Kelli is a senior majoring in literature with minors in journalism, human development and Italian. She is also a member of the Eckerd College Emergency Response Team and the Student Title IX Council.