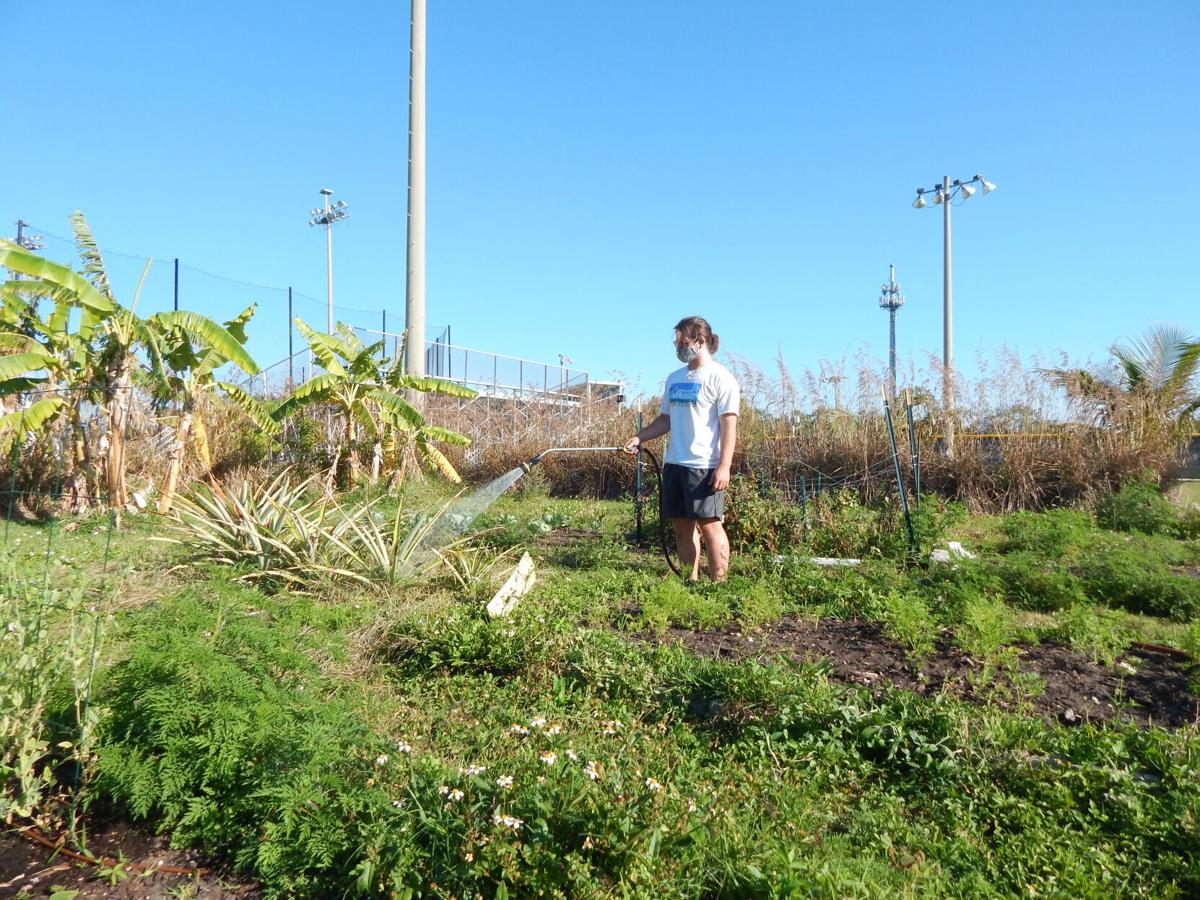 First-year Colby Stratman works in the garden, watering some plants. Stratman is involved with both the current garden and planning for the future farm. 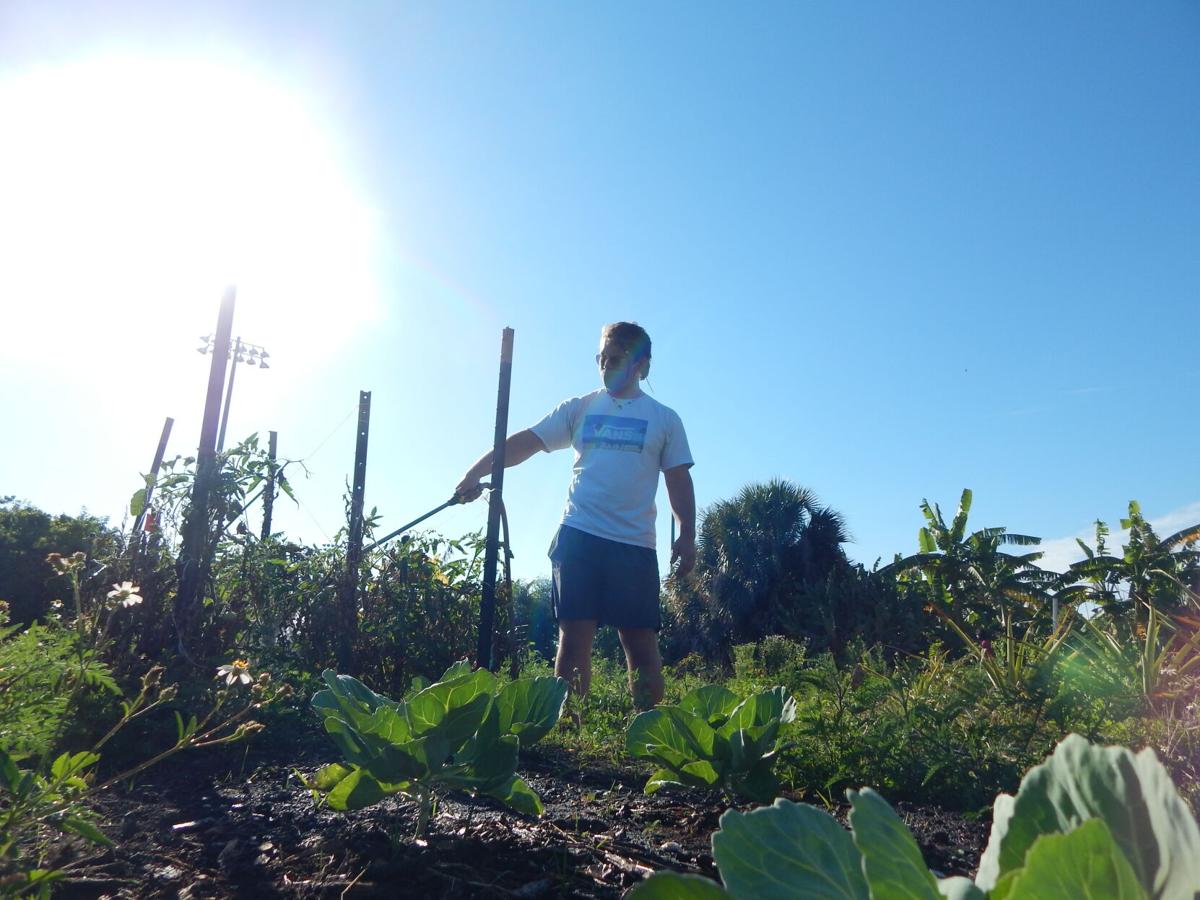 Stratman waters more crops in the existing garden, located behind the turf field and GO pavillion. 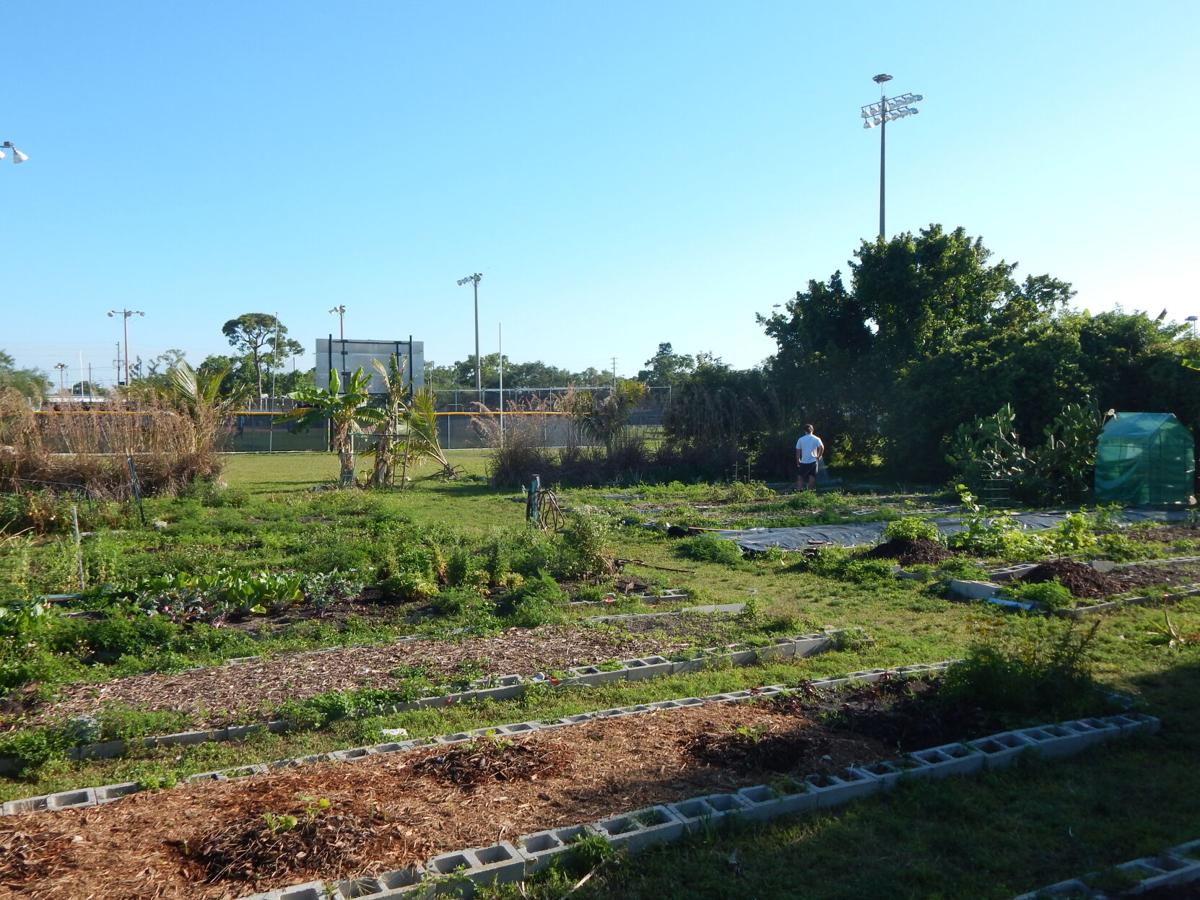 Students interested in getting involved in the garden club can sign up for a volunteer shift, or simply show up.

First-year Colby Stratman works in the garden, watering some plants. Stratman is involved with both the current garden and planning for the future farm.

Stratman waters more crops in the existing garden, located behind the turf field and GO pavillion.

Students interested in getting involved in the garden club can sign up for a volunteer shift, or simply show up.

Four years ago, an idea was sprouted from the minds of numerous professors and members of the existing campus garden. The idea, a community-based farm that would expand the existing garden, is now becoming a reality.

“The focus has really been on trying to imagine what a ‘liberal arts farm’ would look like,” Instructor and Internship Coordinator David Himmelfarb said. “[A farm] that isn’t necessarily a production farm that’s about maximizing production and maximizing yields, but how could we create a farm that is so uniquely tailored to the mission, social life and academic values?”

Now, a team of faculty, staff and students are taking action to set this plan into motion. Himmelfarb, along with Associate Professor of Biology Liza Conrad, Director of Sustainability Evan Bollier and two students from the existing garden, one of whom is first-year Colby Stratman, are in the process of starting this project.

An idea sprouted from garden roots

According to Himmelfarb, former President of Eckerd College Donald Eastman was interested in the idea of building a farm on campus. A group of faculty convened to talk through a plan to create a garden that was “uniquely Eckerd.”

Conrad was one of the first to be contacted. With her background in plant breeding and agriculture, Eastman sought her out and asked if a farm on campus would be feasible.

“The hard work and passion that [the garden club] have put into that space over the last 10 years is, in many ways, an inspiration for this project,” Himmelfarb said. “I don’t know if we would be sitting around talking about a farm if students weren’t involved and invested in gardening on campus.”

However, these initial conversations never led to any concrete plans or results. With Damián Fernández becoming the new president of Eckerd in July 2020, this group of faculty and students hopeful for the farm saw a new opportunity.

“President Fernández has been instrumental in making it possible,” Himmelfarb said.

Prior to Fernández´s presidency, the idea of the farm was in a complicated cycle. There would be periods of hope followed close by periods of stalemate, according to Himmelfarb.

Now, Fernández is actively working on implementing his Strategic Planning Initiative. In this initiative, the farm project is under pillar four titled “A Sustainable Future: Pursuing Resilience.” Himmelfarb said that Fernández has helped a lot in securing the funding from trustees and other sources to make this whole project possible.

With the ball rolling now four years after the initial conversations, faculty and students are ready to undertake the project.

“I think what had come out of those initial conversations was that, to realize the true potential of this idea of a ‘liberal arts farm,’ we needed full-time support and staff,” Himmelfarb said. “We needed a farm manager...someone with intimate technical knowledge of sustainable agriculture.”

While several professors at Eckerd, including Himmelfarb and Conrad, teach courses about food, gardening and other related fields, none have had intense experience in managing a farm. The board working on this project realized this as the first step needed in the process.

The position of the first farm manager of Eckerd has been advertised nationally and received a lot of interest thus far, according to Himmelfarb. Himmelfarb says that they are currently reviewing applications and hope to have interviews soon.

The hiring committee is composed of faculty members, interns with the Office of Sustainability and members of the Garden Club.

Because the farm manager would ideally have years of experience in agriculture, they would be instrumental in the planning process. But, Himmelfarb stresses that there would not be one central “leader” of the farm.

The goal is to have a farm manager hired and in person this summer.

“The very first order of business before we break ground or decide to make any major decisions is to get the full participation of the community,” Himmelfarb said.

A “design charrette” is an idea that may be a reality come Fall 2021. This would be a forum in which students could input their ideas for a farm and be a part of the design process. The design of the farm is envisioned to be a collaborative effort among the entire Eckerd community.

And no idea is off of the table. While livestock are not a part of the plan as of now, it isn’t an impossible idea.

“If you look at some of the best models of sustainable agriculture in the United States and around the world, animals are a part of it,” Himmelfarb said.

Himmelfarb said that he has talked to lots of faculty, staff and students who were excited about the possibility of having livestock, such as chickens, be a part of the farm.

In terms of academics, both Conrad and Himmelfarb spoke of the almost endless possibilities. Aside from just growing crops, the farm is envisioned to be a place where classes can be integrated. Some of these courses could possibly be Sustainable Development, Plant Biology, Food Movements, Introduction to Environmental Studies, Performance and the Environment, and Writing the Environment to name a few.

Conrad is particularly excited about the course opportunities.

“I mean, I’m a professor. I teach, that’s what I do,” Conrad said. “I’m really excited to see classes out there using the space.”

Aside from academics, there will be federal work study positions available in the farm. Students will be able to get hands-on agricultural experience and work alongside the farm manager on a daily basis.

Additionally, the farm will give students an opportunity to gain internship experience without having to leave campus. Himmelfarb says that this will be a great thing for students who cannot get off campus for internships, especially environmental studies majors who need a 70 hour internship as part of the major.

First year Colby Stratman is one of the members of the garden club that has been a part of the farm project. He says that he is excited about the farm heightening the opportunities of the garden.

“The farm is definitely going to be more of an official thing connected with the school, as opposed to the garden which is a lot more student run,” Stratman said. “So I’m excited for the garden to have a bigger budget and to be able to get some stuff done a lot faster.”

Community growth and beyond

The reach of Eckerd’s up and coming “liberal arts farm” does not end with courses, internships and work study opportunities.

Another aspect of the farm is to partner with Bon Appetit to supply farm fresh produce to our own dining facilities. While the amount of produce planned to go to Bon Appetit still depends on the scale and amount of land dedicated to the farm, there will be a partnership regardless.

Himmelfarb said that, when talking to the former manager of Bon Appetit, the scale of the farm did not matter.

“He said, ‘Whatever scale you produce, we can work with,’” Himmelfarb said.

Most campus farms around the country are sort of monoculture in that they produce; for example, a bulk amount of greens that is given to the food services. Himmelfarb stresses that the envisioned Eckerd farm will not work in that way. Rather, it will be a diversity of different crops, much like the existing garden does today.

In addition to supplying fresh produce to our own facilities, there are also opportunities to strengthen Eckerd’s relationship with local organizations and food pantries. Possible community partners include, but are not limited to, St. Pete Youth Farm, Gulfport Food Forest, Saturday Morning Market and Tampa Bay Network to End Hunger.

The plan for the entire farm project is expected to be fully operational within three years. Both Conrad and Himmelfarb are confident in this plan being realized in that time period.

“I’m really excited for what we can make of it,” Himmelfarb said.

Conrad is confident that once a farm manager is established and community participation is engaging, the plan will take off.

What students can do right now

For now, interested students can get involved with the garden club.

“The garden is really simple,” Stratman said. “You can definitely just come out any time.”

Stratman recommends following the garden club on Instagram, at @eckerd_garden_club. The club offers shifts Monday through Thursday from 5 p.m. to 6 p.m. or Sunday 3 p.m. to 4 p.m. Interested students can reach out to volunteer to pick produce at the garden and help out all members involved.

Or, like Stratman said, just show up to the garden to get involved and learn a little about gardening.

Anyone interested in getting involved with the farm right away can contact Associate Professor of Biology Liza Conrad, since she will be the faculty farm advisor for next year.

With the collaborative project beginning to get underway, the Eckerd community has something to look forward to this coming fall. Himmelfarb is excited about the collaboration.

“I’m just really excited to see what people have to say and how we can build this thing together,” Himmelfarb said.

Carter is a junior majoring in Environmental Studies and Spanish with a minor in Journalism.