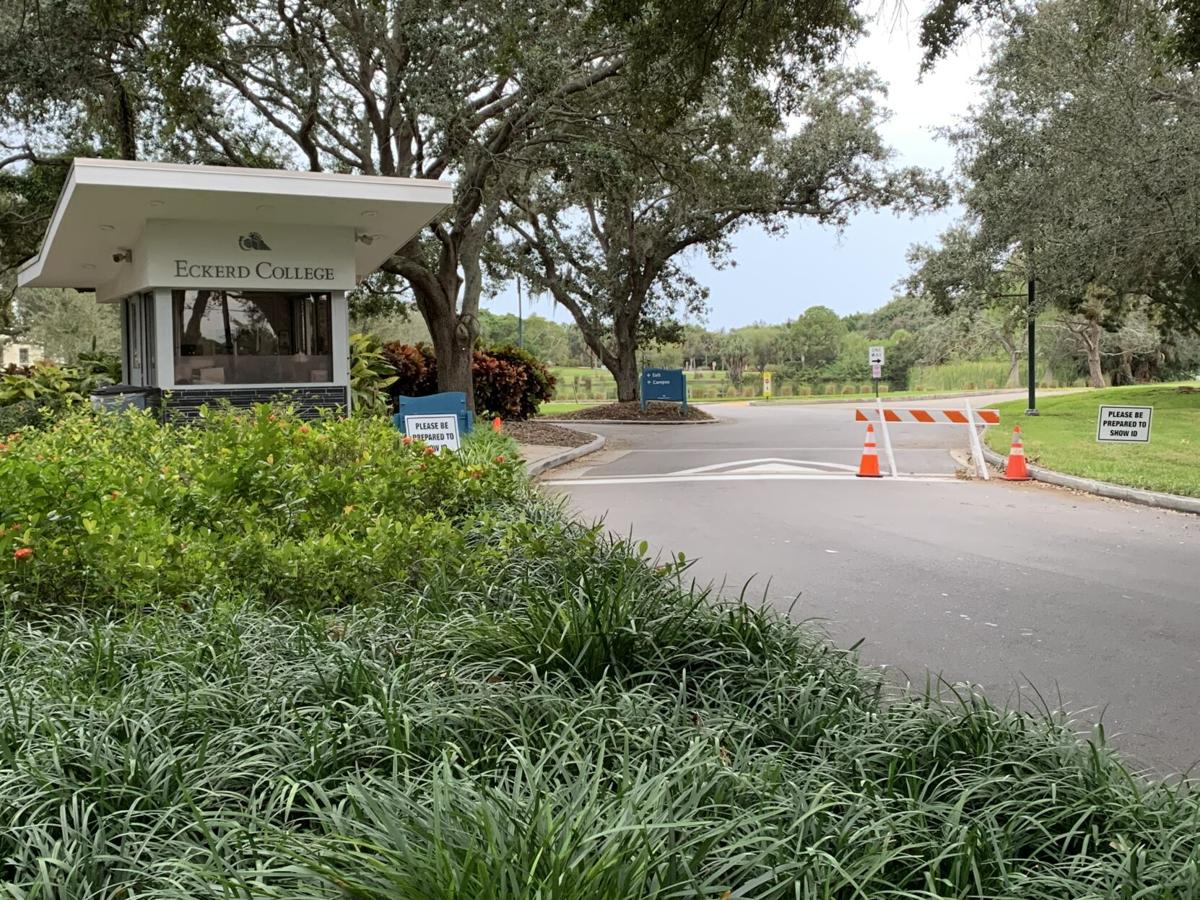 The complaint claims many negligent practices of campus safety. One of the conditions it cites alleged inadequate perimeter fencing and security.

This email was sent on April 22, 2016. This was sent by the Eckerd College Emergency Notification System. 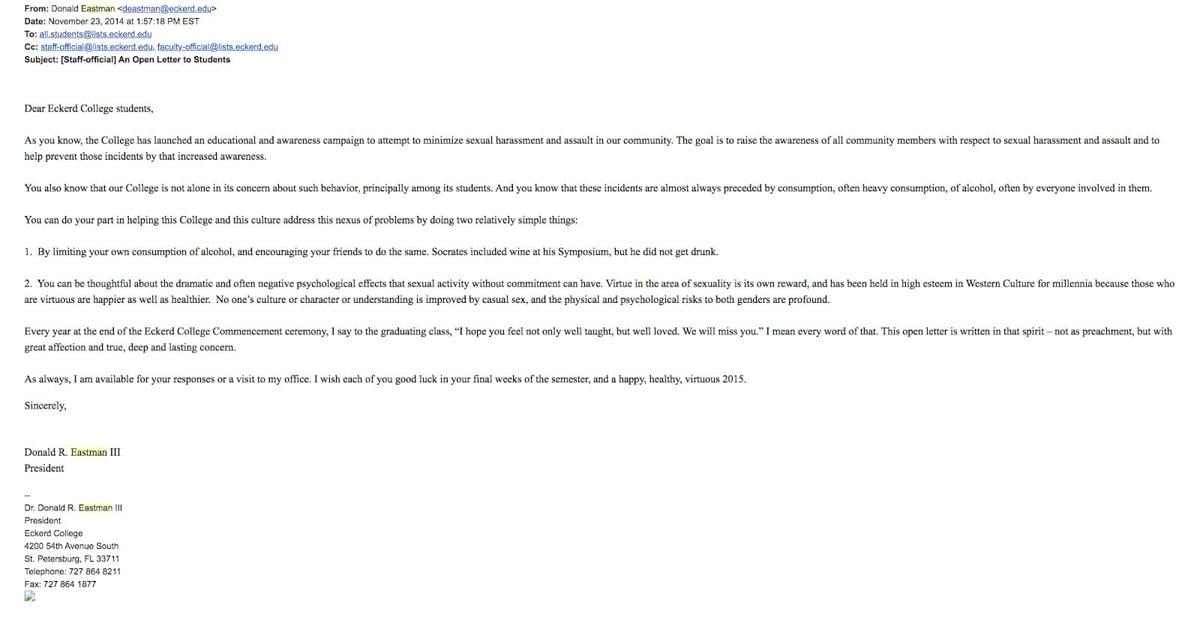 This is the email from former President of Eckerd College Donald Eastman referenced in the complaint. This was sent on Nov. 23, 2014.

On Dec. 2, a negligence lawsuit was filed against Eckerd College in Pinellas County Court, claiming that the college had many years of negligent security practices that played a part in the number of sexual assaults on campus. The complaint claims that these practices led to the plaintiff’s alleged rape in Nu Complex in 2017, and that students were not warned about the unsafe circumstances.

The complaint claims that the college was aware of dangerous conditions that made it more likely that sexual assaults on females on campus would occur. These alleged conditions include the college’s longstanding knowledge of poor security around the perimeter of campus and Eckerd administration adopting a ‘de facto’ policy of permitting parties on campus where underaged students drank alcohol. The complaint also claims that the college assured the plaintiff and all students that the campus had adequate safety but was well aware of the campus’ security problems.

The complaint cites a variety of sources as evidence of negligence. It cites multiple emails from Eckerd administration, including former President of Eckerd College Donald Eastman’s controversial 2014 email about alcohol and sexual assault, Campus Safety’s annual crime statistics report and five articles from The Current from 2012 to 2018.

The Current has decided not to name the plaintiff, a former student, due to the nature of the allegations. She was allegedly raped by a non-student in October 2017 during an on-campus party in Nu. According to the suit, the non-student did not go through the front gate of campus, and was able to get through fencing around Eckerd.

One article the complaint cited from The Current from 2018 is “Campus Safety implements new policies for safety of students.” In this article, Director of Campus Safety and Security Tonya Womack talked about 14 ways that campus could be made safer, including an app students could use to send pictures directly to campus safety or report suspicious activity. Womack also said in that article that Campus Safety fixed broken or knocked down fencing, added lighting, more training for Campus Safety Officers and put more vegetation around the fences near Sigma, West Lodge and the other side of the front gate.

“These improvements were deemed necessary because of the rapes and trespassing that had occurred on campus in 2017, the year the Plaintiff was raped,” the complaint said.

Another article from The Current, “The Achilles Heel of Campus Safety,” is then cited. Written in 2015, this article was about how Eckerd’s security depends mostly on the front gate, and how non-students slip through the back gate.

The complaint cites former Director of Campus Safety and Security Adam Colby’s part of the article. Colby, who is now assistant vice president of operations, is paraphrased in saying that a recurring problem was students teaching their guests to bypass the front gates, such as jumping the fence at the back of campus.

Eckerd had direct knowledge that the safety of the perimeter of campus was “grossly inadequate,” the complaint claimed. It then cites a 2012 article from The Current, “On Patrol With Campus Safety.” This article is about a former editor-in-chief’s ride-along with a campus safety officer.

“Driving along the perimeter, it’s clear the only buffer between Eckerd property and the outside is a weathered, medium-height, chain link fence. At the corners, some areas of the fence have small holes or have been bent so low it would take little effort to step over it,” The Current’s article said.

The complaint also claims that at the highest administrative level, Eckerd College adopted a “de facto” policy of permitting on-campus parties where underage students drink alcohol. Eastman is then quoted from a 2018 article from The Current, “Know Your Limits campaign changes party location due to safety concerns.” This article was about ECOS’ Know Your Limits Campaign holding a party on the ground floor of Omega, after Campus Safety shut down balcony parties due to the risk of students falling.

The suit also alleges that Eastman acknowledged the college’s sexual assault problem in his controversial 2014 email to students and faculty.

“President Eastman's policy response to the multiple rapes endured by Eckerd's female students amounted to blaming the victims and abrogating Eckerd's legal responsibility for the security of its students and dormitories,” the complaint said.

Another example of the college’s alleged unsafe conditions cited by the complaint is when trespassers on April 17, 2016 committed several burglaries after a party at Kappa Dorm Complex. An email, which said that the suspects were likely non-students, was sent out the next day by Campus Safety about forced sexual groping at Kappa.

The complaint said four months after the plaintiff’s alleged rape, the college held a meeting on how to keep dorm parties safe, citing a 2018 article from The Current, “Campus leaders discuss ongoing trespassing problem.”

On the evening of Oct. 28, the plaintiff attended Halloween Ball, an off-campus, college-sponsored event. They returned to campus at around 10:00 p.m., had several drinks at a friend’s dorm room and went to a college-sanctioned party at Nu around 11:30 p.m.

According to the complaint, the young male followed her at around 1 a.m. from the stairs in Nu into the bathroom. He then allegedly raped the plaintiff. The suspect was later identified by a student on Snapchat and picked from a lineup by one of the male students. He was then arrested.

According to the complaint, the police determined that the suspect was the brother of a friend of a female Eckerd student. Both the suspect and the brother came to campus by jumping the perimeter fence. The complaint then said that Eckerd College knew that female students had been victims of rape and sexual assault on campus.

The plaintiff’s lawyer, Y. Drake Buckman, has not yet responded for comment.

Robbyn Hopewell, director of media and public relations, said the college has yet to be served, meaning officially delivered the summons and complaint of the lawsuit. “The College does not comment on pending litigation,” she said.

This story is still developing, please check back for more updates.