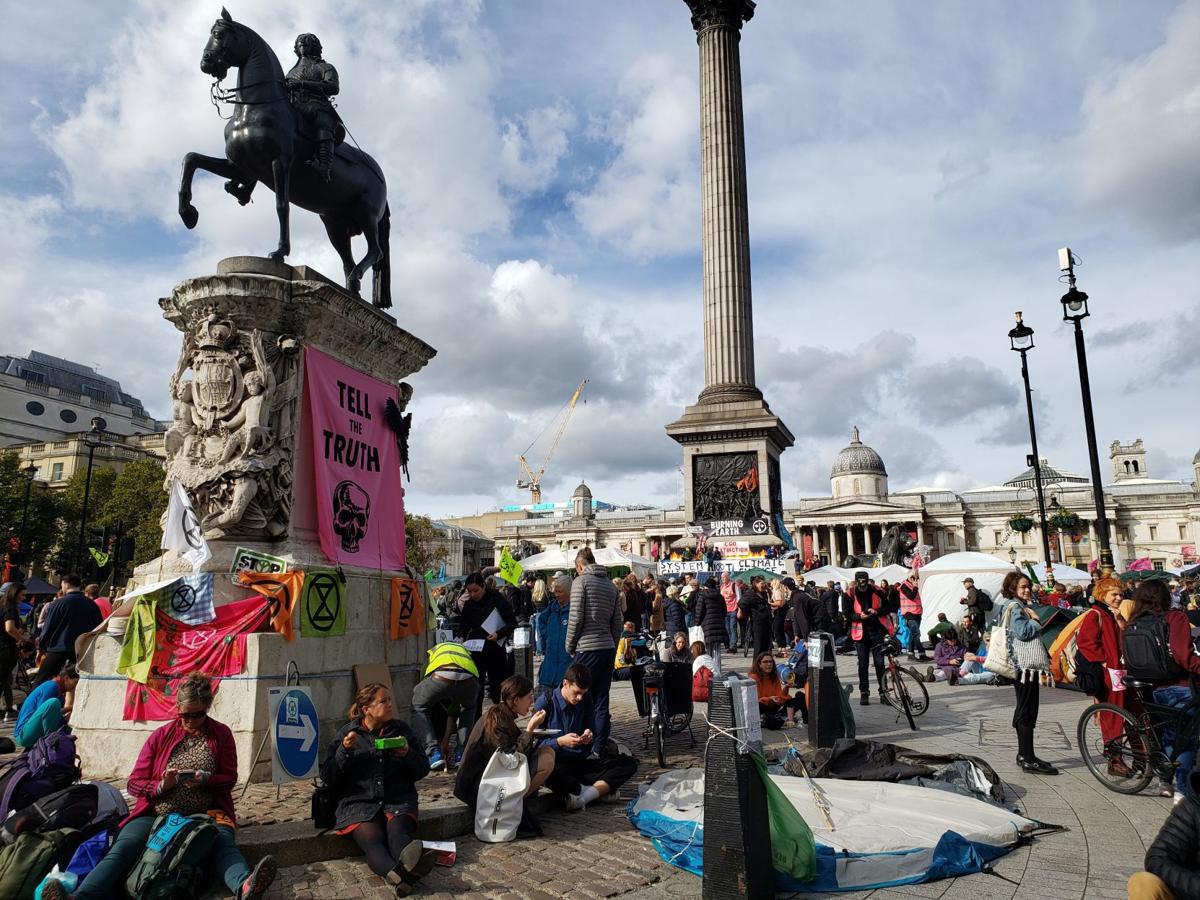 Protesters occupying Trafalgar Square on Oct 9. Many of the surrounding roads were closed. 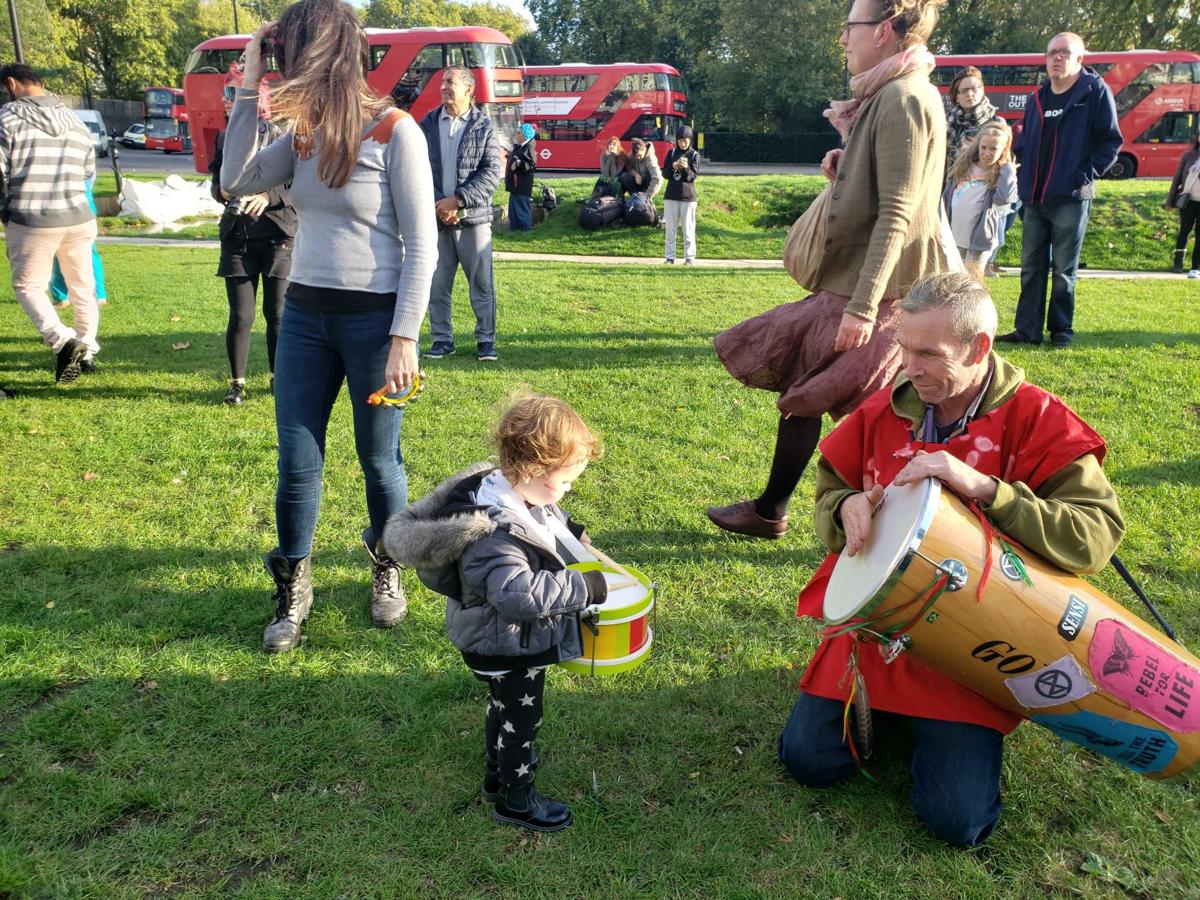 A child playing the drums with a man. The mother, behind the child, was excited when she saw the man, and brought her child over immediately. 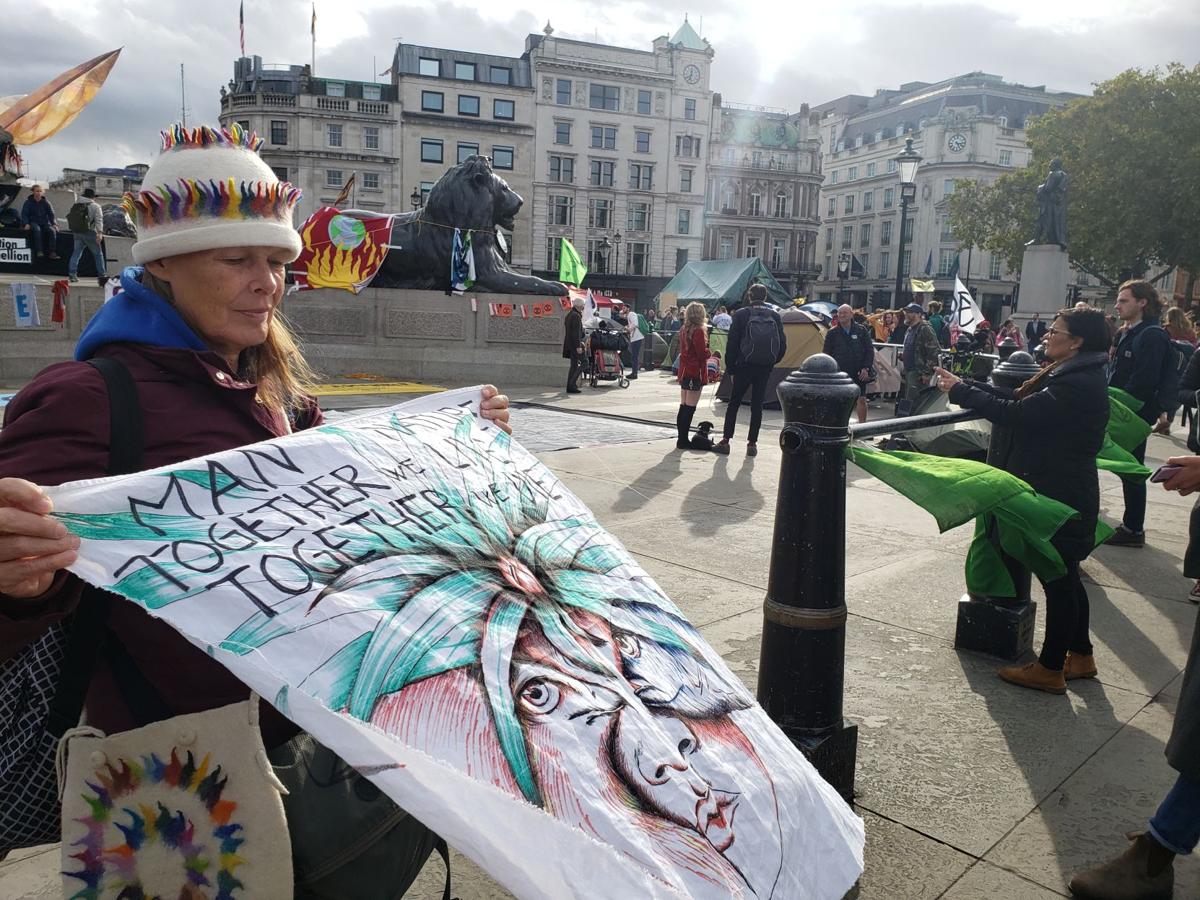 Blazing Rainbow, who got her name from a native american chief, holding a sign. She gave and listened to speeches during the rallies. 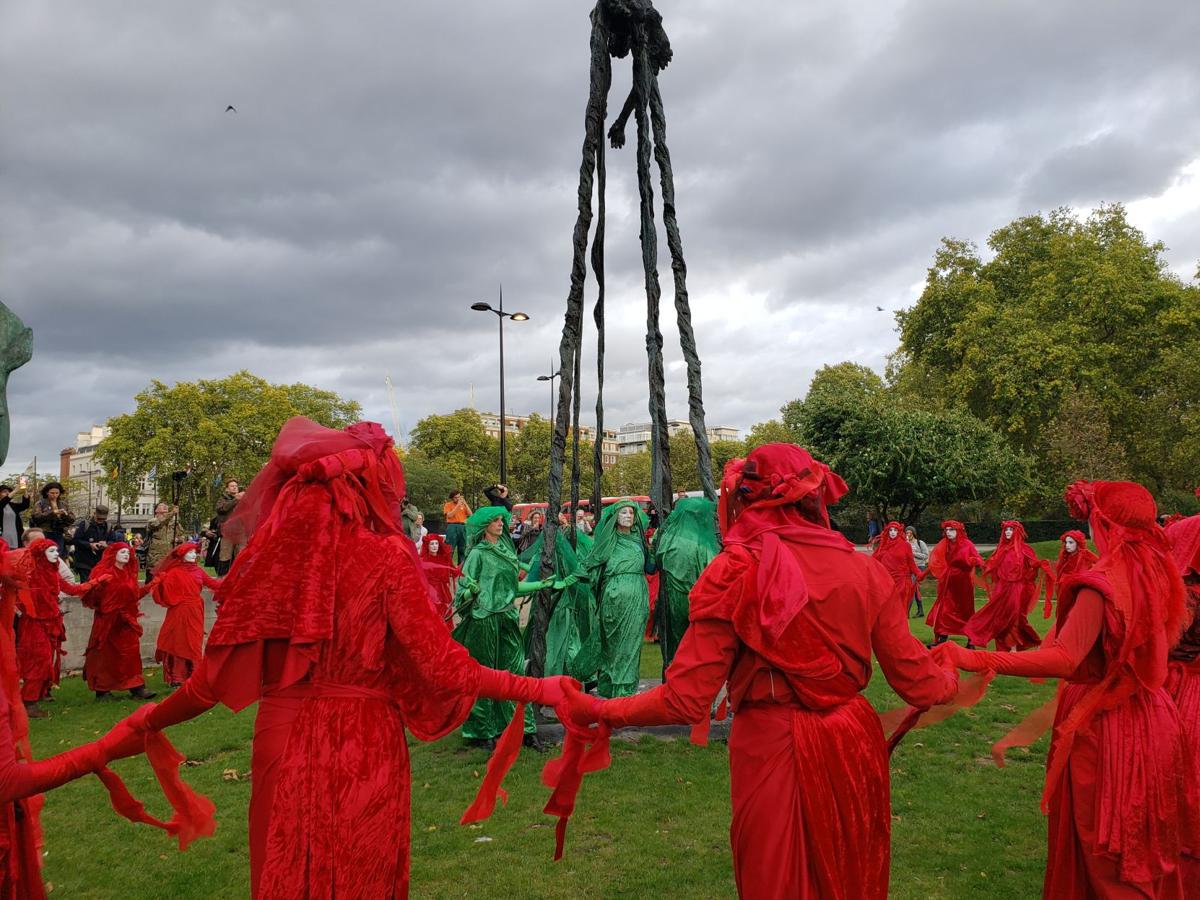 The red costumes stand for all the extinct species, while the green stands for what is alive. "Flight," a sculpture by David Breuer-Weil is shown in the middle. 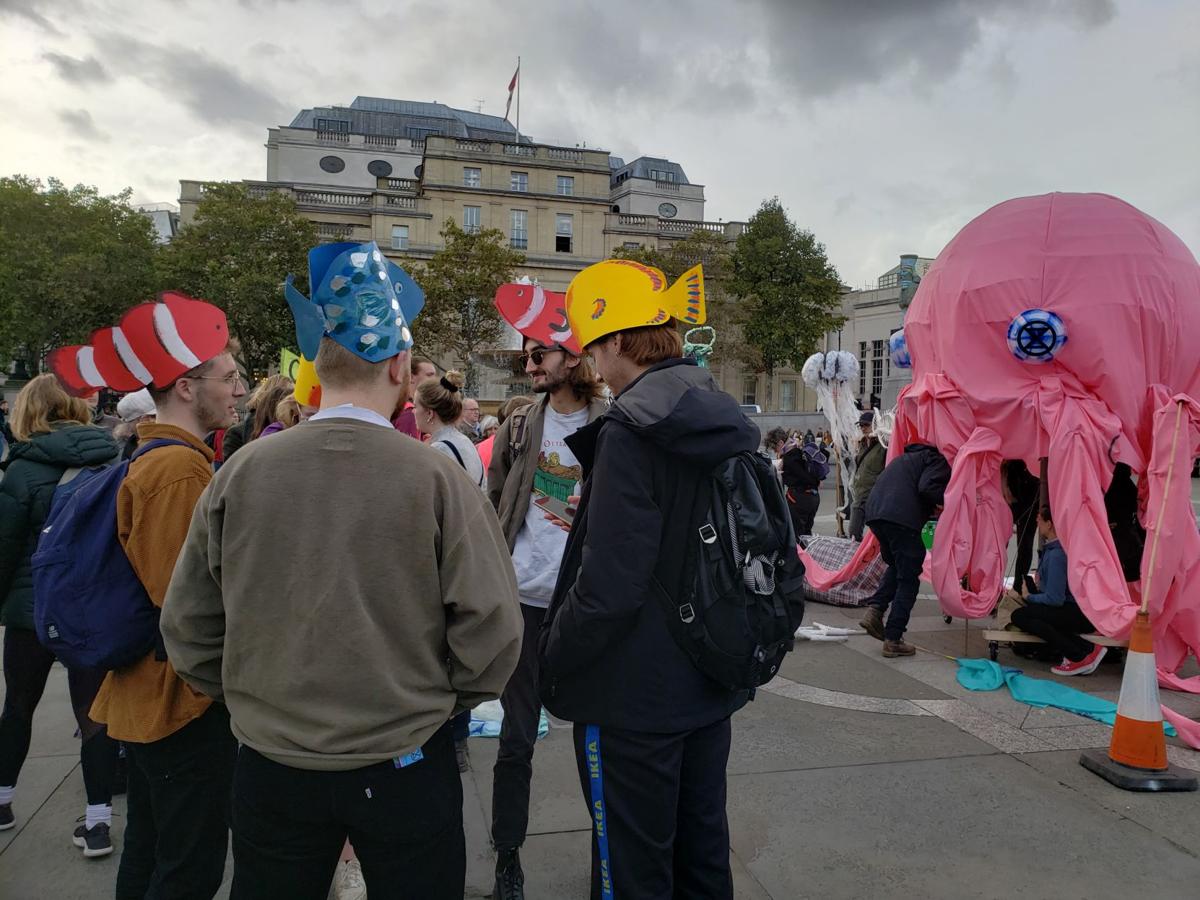 The view from outside the octopus the women were in. The Canadian Embassy is in the background. 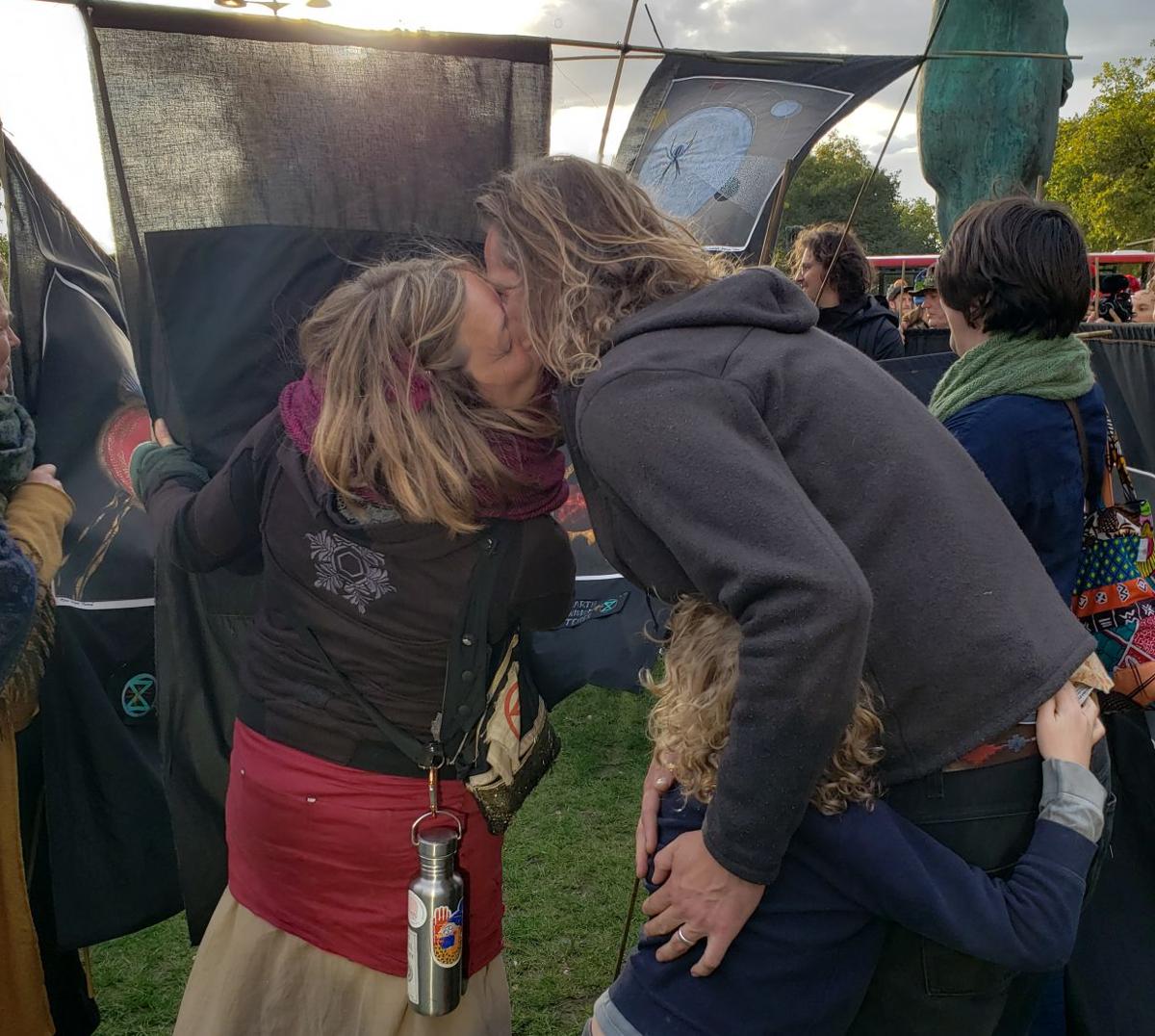 A couple kissing while their child embraces the father. Many children, families and dogs attended the rallies. 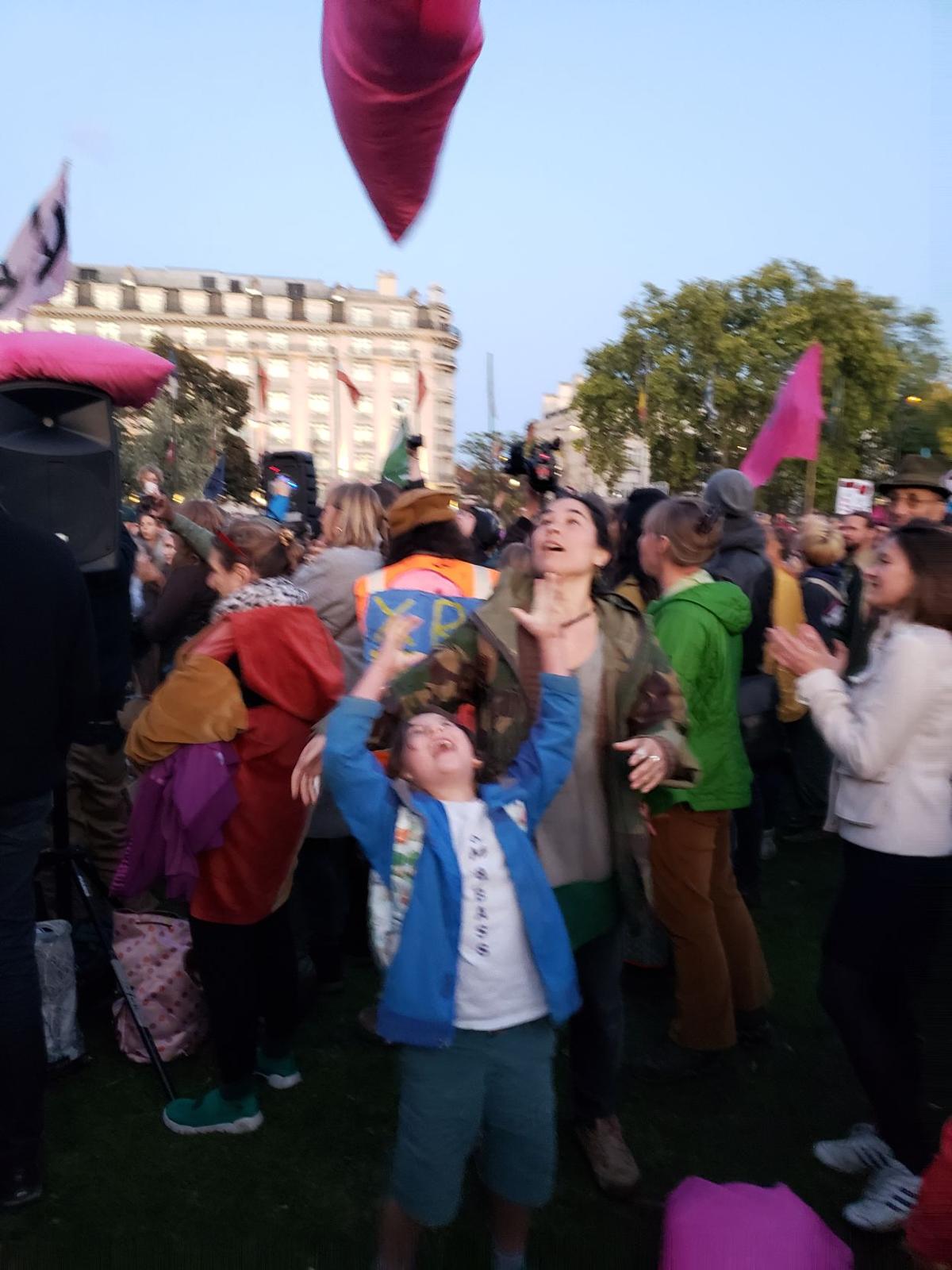 A child throws a pillow in the air to the dismay of their mother. The pink pillow is a reference to the Oct. 5 raid on the organization's warehouse, where solar panels and pink pillows were taken. 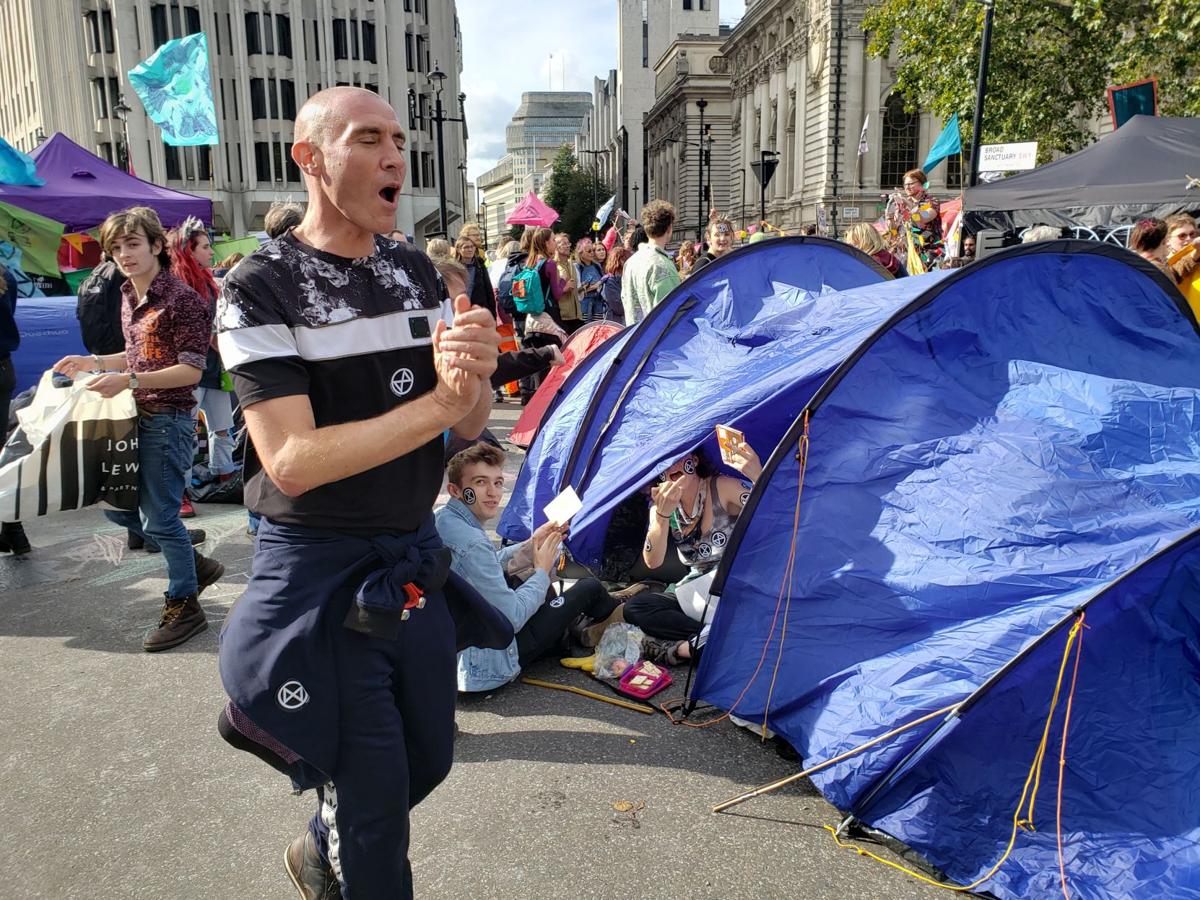 Demonstrators reacting after a policeman leaves. This is near Westminster Abbey and the Department Of Business, Energy and Industrial strategy. 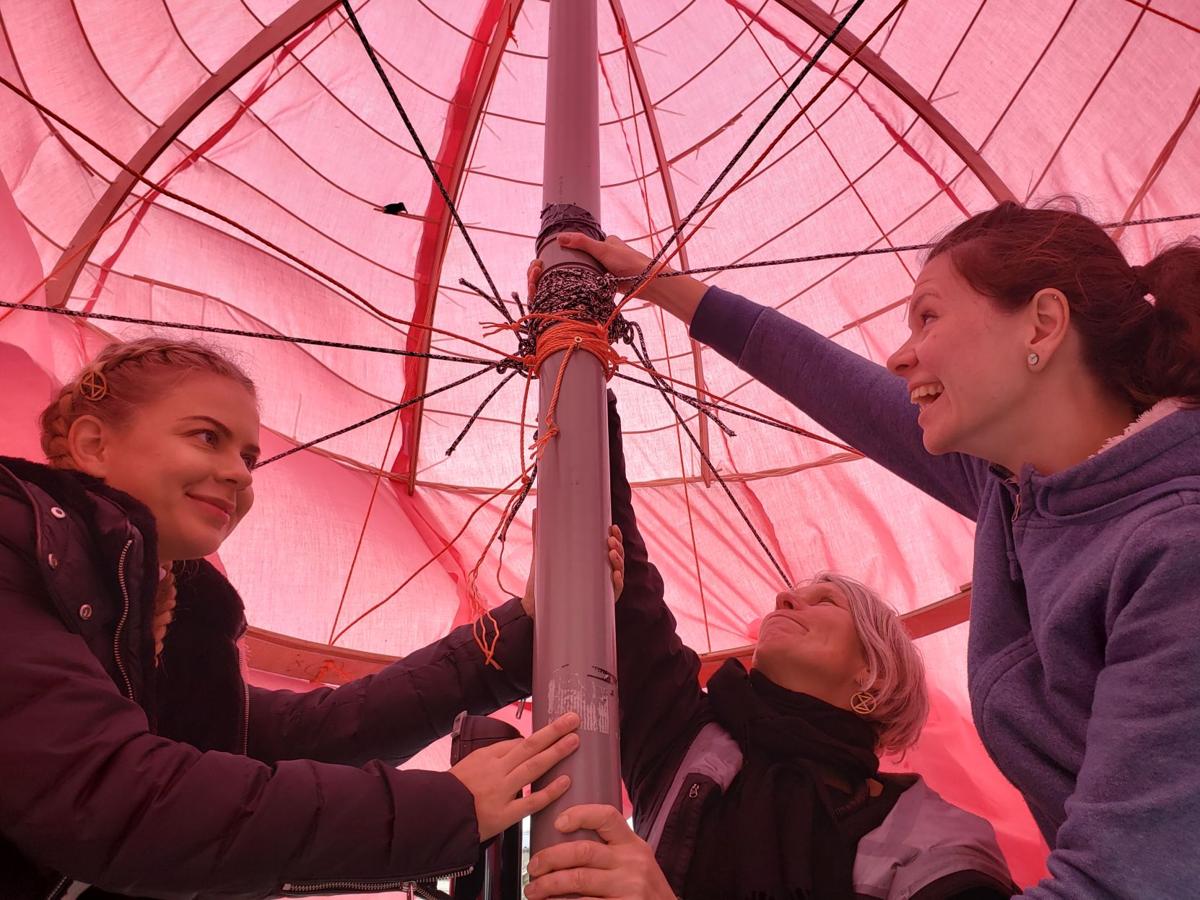 Three strangers who connected while maintaining a large homemade octopus. They said the animal was chosen to represent sea life affected by climate change. 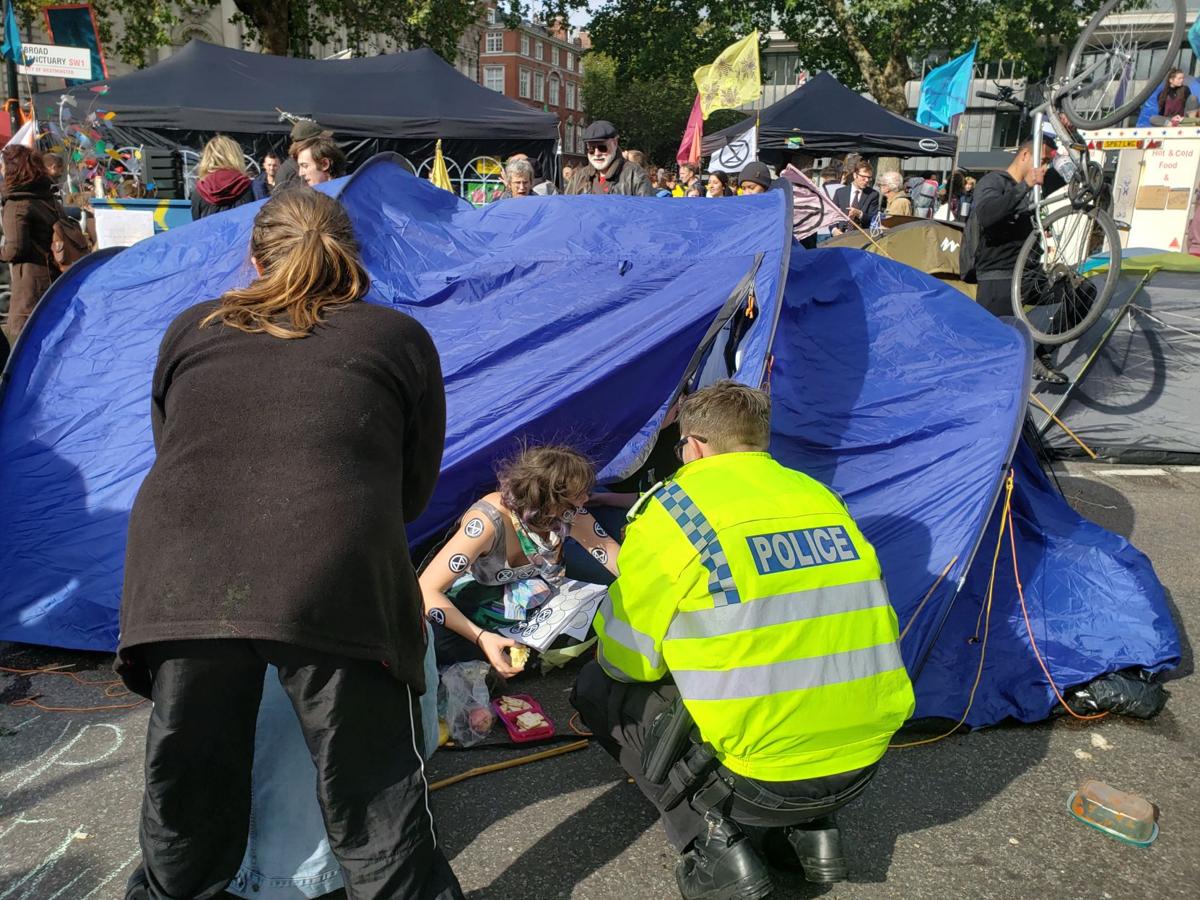 A policeman talking to protesters in a tent. Officers were brought to London from around the U.K. in preparation for the rallies.

Protesters occupying Trafalgar Square on Oct 9. Many of the surrounding roads were closed.

A child throws a pillow in the air to the dismay of their mother. The pink pillow is a reference to the Oct. 5 raid on the organization's warehouse, where solar panels and pink pillows were taken.

The Extinction Rebellion’s first major protest was in April in London, England to raise awareness and political action on climate change. Since then, the group has spread around the world to other major cities. The organization is holding another large protest, which started on Oct. 6, near parliament disrupting traffic to force the government to combat climate change.

Blazing Rainbow is a part of the protests with the Extinction Rebellion rallies and even flew into London just for them.

After a week of demonstrations and blocking roads in Westminster and other historical and political sites, a public order was given on Monday, Oct. 14 formally banning the protests.

As of Friday, Oct 18, the Extinction Rebellion has held continued demonstrations in parts of the capital, including Trafalgar Square and Oxford Circus.

During the first few days of the rallies, signs and chants echoed the three demands of the group: for the government to tell the truth by declaring a climate emergency, act now to reduce carbon emissions and create a Citizen’s Assembly to lead parliament on ecological issues.

Many protesters brought tents to stay overnight while chefs made stands and cooked free food for everyone and musicians livened the crowd.

Blazing Rainbow also detailed changes in daily life that can help the environment, like eating as local as possible, buying only clothes that are needed and wearing a heavy coat indoors instead of using heating during the winter when possible.

“Much of what we are doing is teaching people to love and respect themselves,” Blazing Rainbow said. “Because you can’t love and respect others and the planet, you don’t feel the same about yourself.”