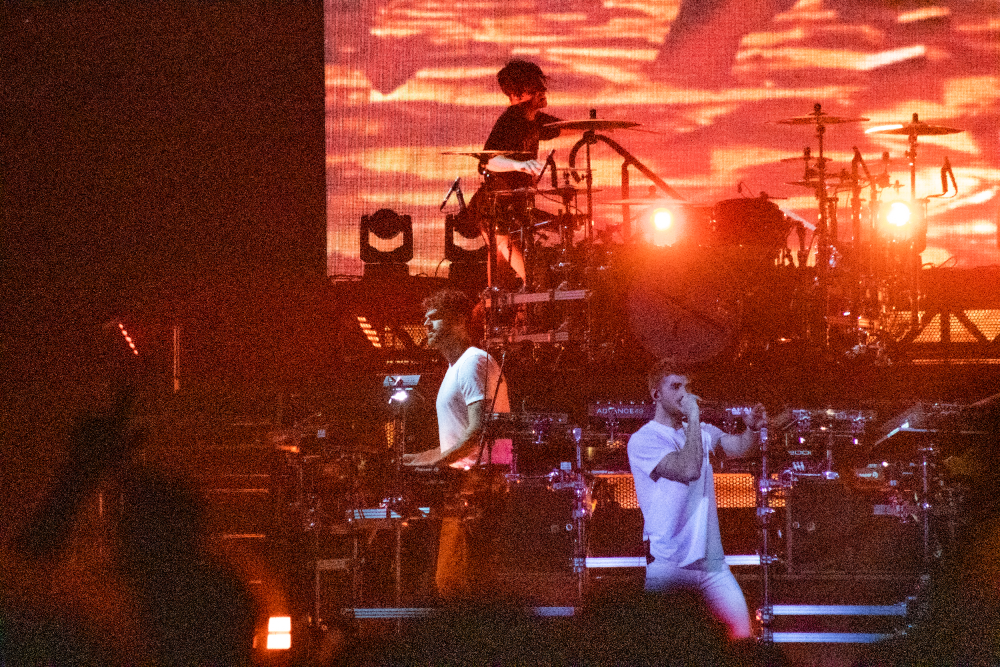 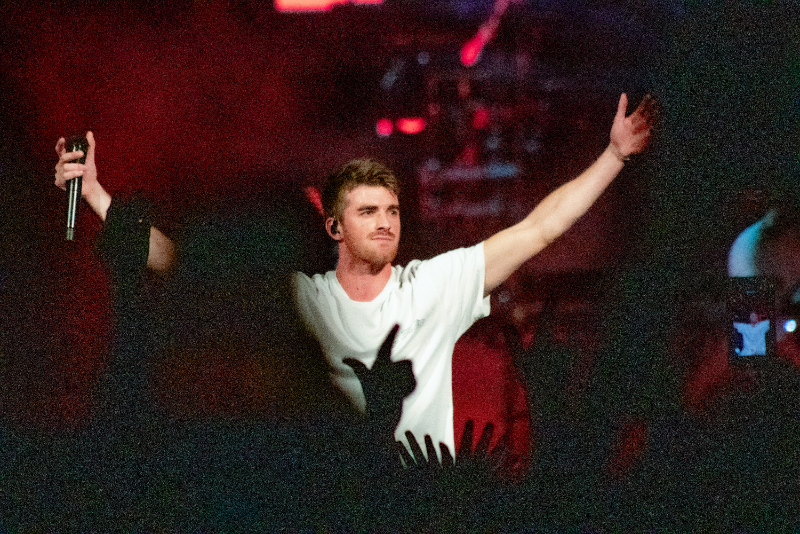 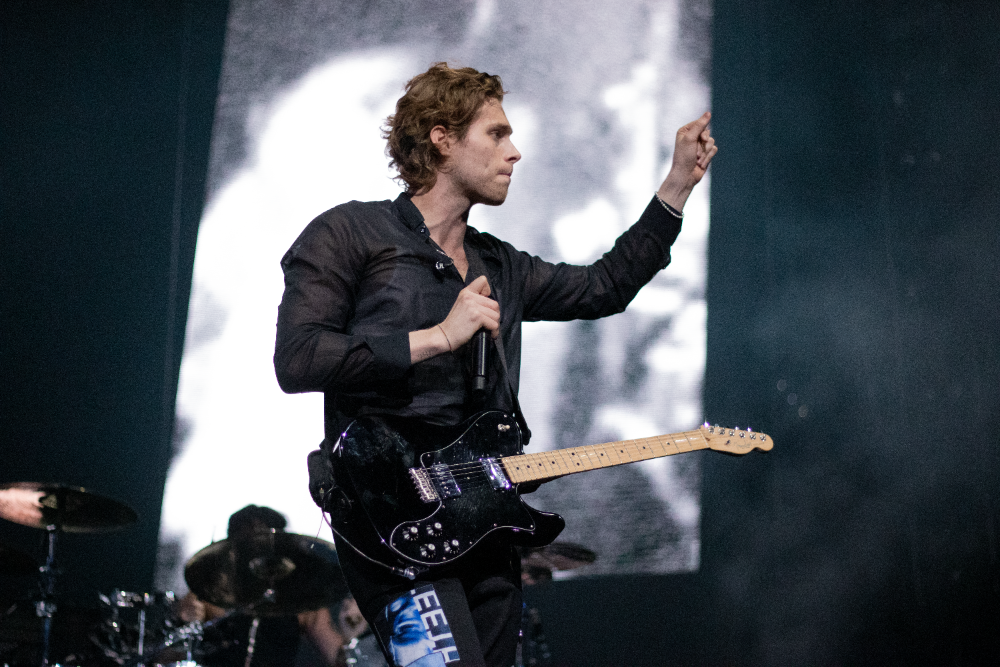 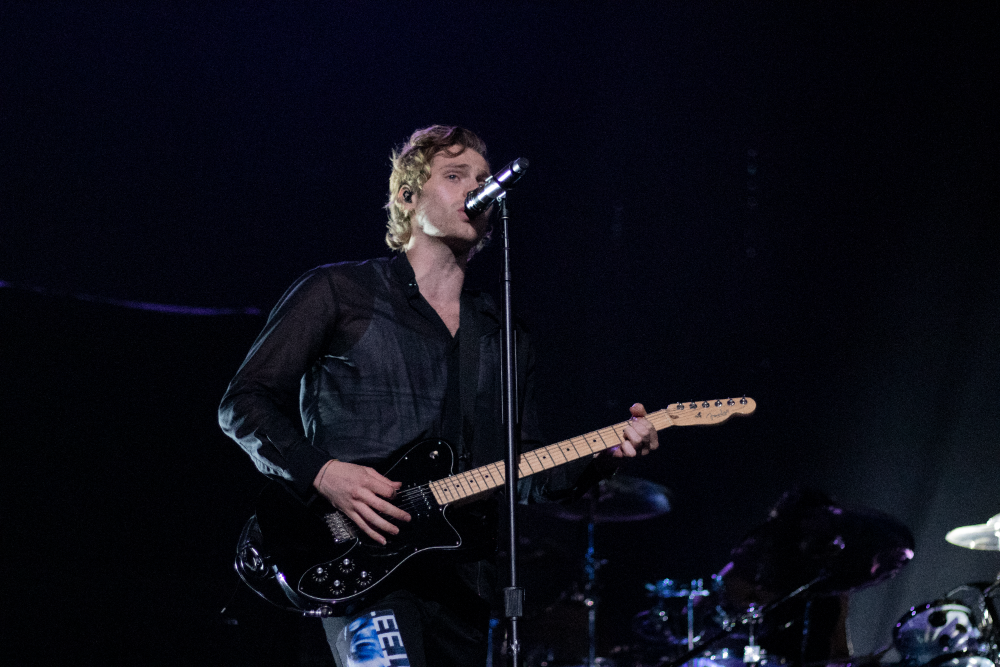 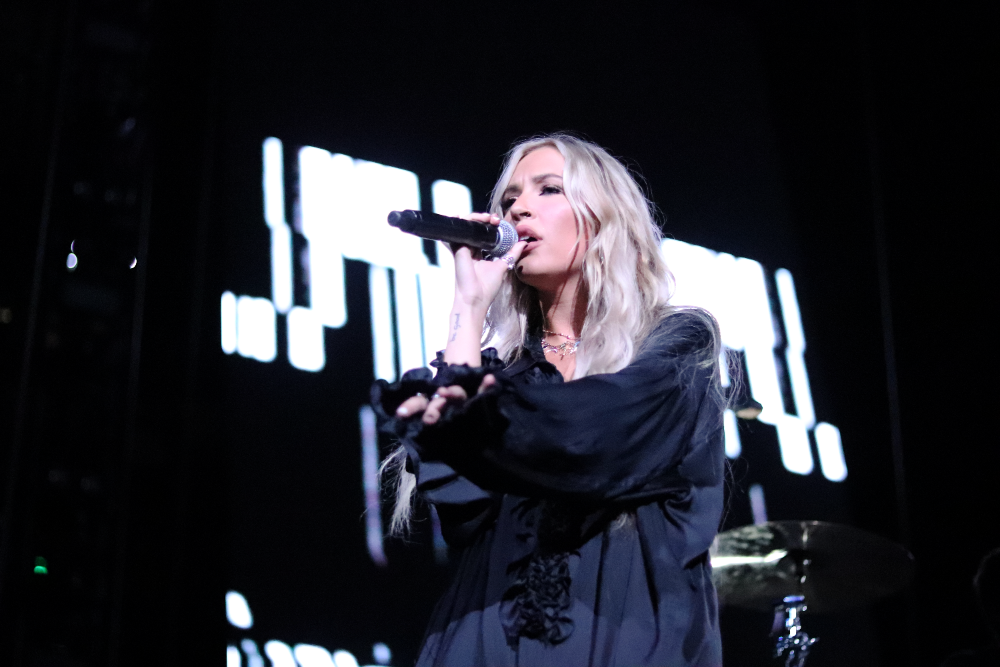 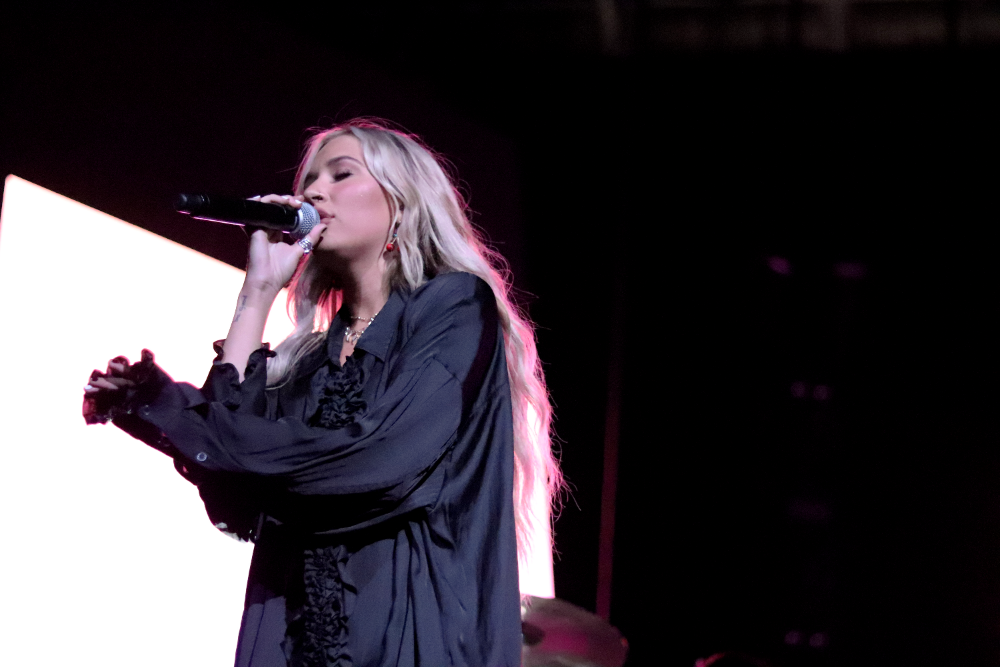 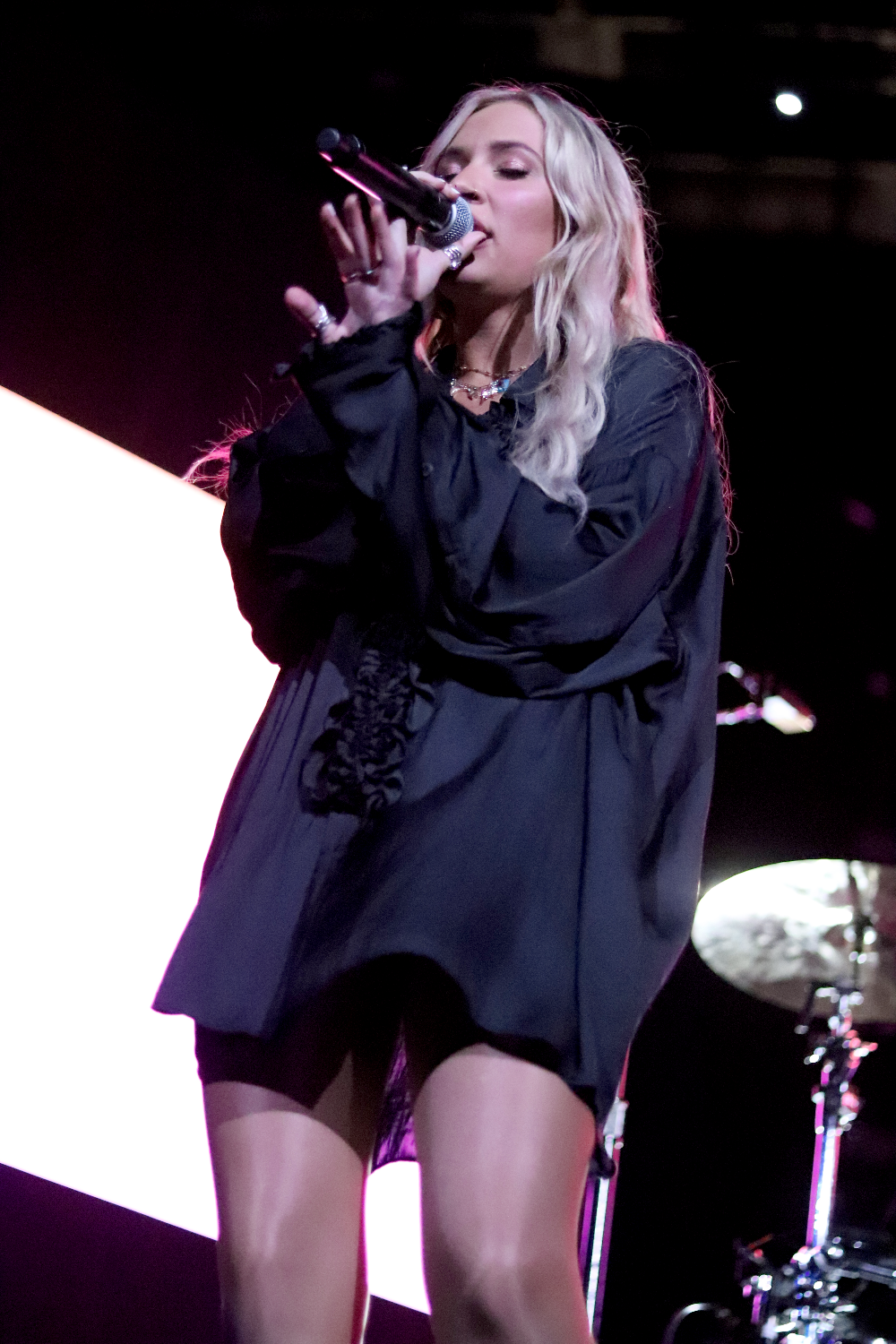 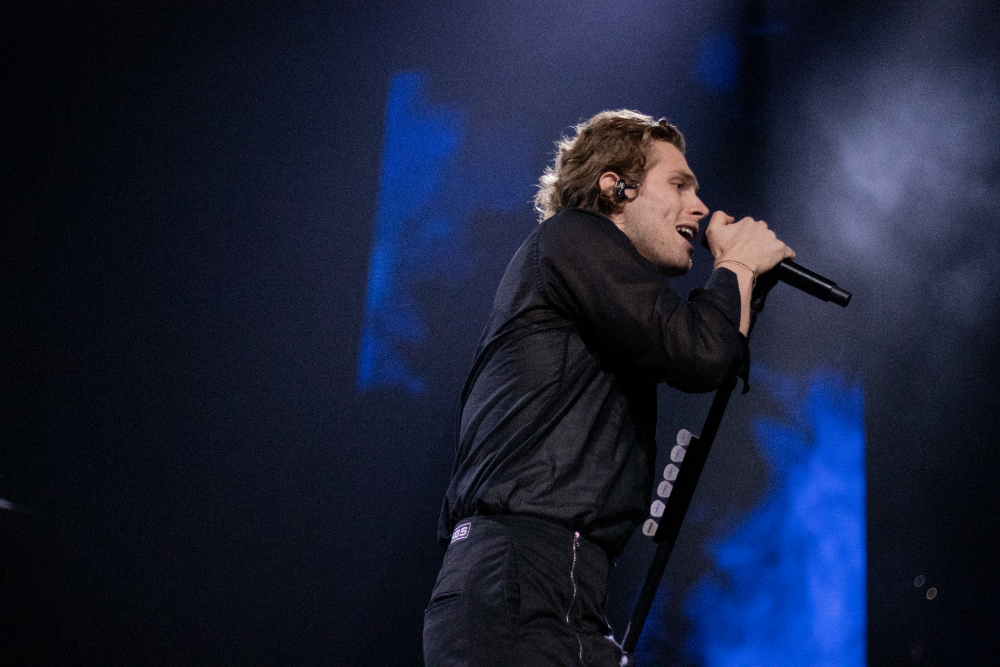 The bright lights of the Amalie Arena dimmed. Everyone was instantly on their feet, cheering that their wait was finally over. The roar of the crowd was deafening in the packed arena. Screens above the stage lit up and the lower half of a C.G. face appeared.

Large metal cross beams lowered from the ceiling creating the triad symbol associated with the tour. The Chainsmokers, Andrew Taggart, Alex Pall and Matt McGuire appeared onstage holding fiery torches. They ran to their places, holding the torches high, and small fireworks sprung up from the stage. It was clear this was going to be quite a show.

The Chainsmokers performed in their World War Joy tour at Amalie Arena on Oct. 25. Lennon Stella and 5 Seconds of Summer performed as opening acts. With parts of the stage moving, pyrotechnics, and extreme sports World War Joy was no average show.

When I entered Amalie Arena the high, wafting sounds of Lennon Stella’s voice filled the darkness. Stella swayed gently with the music in her loose black mini-dress in front of three large screens showing black and white movie footage of couples kissing as an accompaniment to her unreleased song, “Kissing Other People.” The people standing in the pit were bathed in red light and they held their hands up and swayed to the music. At one point I heard desperate screams of “I love you Lennon.”

After a brief intermission for food and drink runs it was 5 Seconds of Summer’s time to shine. I saw some people wearing their merch and many people singing along, line by line, to their songs. A few times Luke Hemmings, the lead singer, chose a part of the song to quickly teach the crowd so that we could participate when he pointed at us. Sometimes he shouted “Jump! Jump! Jump!” and the arena would shake for him.

During a quick break he talked to a man near him in the pit.

“What are you drinking?” Hemmings asked. “Fireball? God, we are in Florida,” he laughed.

They performed “Amnesia,” and the crowd soulfully sang along. They announced that their next album would be released in 2020, and everyone went wild. The arena screamed along to the chorus of their last song of the night “Young Blood.”

The Chainsmokers ran onstage to thunderous applause. Once Taggart, Pall and McGuire had taken their place Stella came back onstage to accompany them for their first song of the night, “Takeaway.” They featured, along with an accompaniment from Stella and 5 Seconds of Summer, a recorded female voice and some innovative screen work that put a face to the voice to recreate the feelings of their recorded songs. The face never appeared too realistic, more like futuristic android technology, staying with the bold and innovative style of the show overall.

The production for the World War Joy tour was off the charts. Some songs featured pillows of fog and actual flames. Sometimes sparkling fireworks shot up from the ends of the stage, sometimes sharp lasers danced around the stadium. I thought the arena came alive for 5 Seconds of Summer, but when Taggart called for the audience to sing along and jump the arena rocked like an earthquake.

A cage ball lowered from the ceiling for a particularly popular song, “Sick Boy.” Taggart got in and it rose back up in the air. As he sang, he ran around and clung to the bars of the ball like a caged animal. The audience went wild.

“He’s a hamster!” someone yelled.

Next they showcased the Globe of Death. The Globe of Death is an act where several motorcycles enter a small round cage and drive around inside it. They did this for a minute before two women in neon clothes joined them. They stood at the center of the cage and high fived the motorcyclists.

For the finale Taggart slowed down the show. He got a drink and raised a toast.

“Cheers, we’ll come back anytime you need us,” he promised.

They played “Closer,” their most popular song. Taggart’s voice sometimes cut out to allow the audience to sing. As the song ended, purple and red confetti exploded from the stage.

World War Joy was a show of a lifetime. It is impossible to recount all of its amazing acts. As we walked out of the arena I heard a girl on her phone.

“I can’t believe you missed it,” she said, “it was the best show ever.”