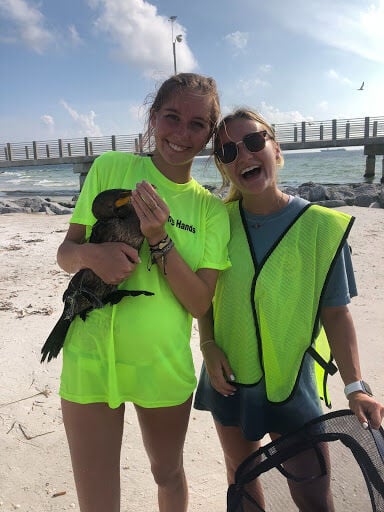 Fairl Thomas (left) and Sofi Lorenz (right) with the rescued cormorant. This photo was taken an excited tourist from New Jersey. 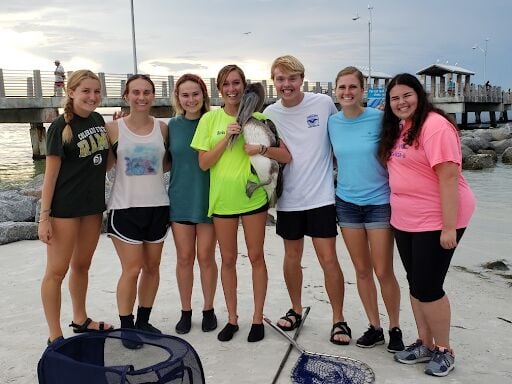 Fairl Thomas (left) and Sofi Lorenz (right) with the rescued cormorant. This photo was taken an excited tourist from New Jersey.

From laser tag to glow golf and movie nights on Kappa field, students on campus have had ways to have socially-distanced fun as they move back to Eckerd and start the Fall 2020 semester. However, while the campus offers many activities, its clubs, student-run and organized, have had to adapt to the new norm of what used to be in-person gatherings.

SOS, a group that rescues birds caught in fishing lines and other unsavory situations, has been affected especially hard by the pandemic. Club head and senior Fairl Thomas said that her “very hands-on” club, which used to make trips to Fort De Soto, the Skyway and other places to save their feathered friends, had to meet virtually once campus closed.

She reminisces about hectic past rescues, such as an entangled cormorant at Fort De Soto Gulf Pier that was freed “on like day four” with the help of “three friendly tourists” and was not able to fly. Upon taking it to Seaside Seabird Sanctuary, the club discovered that it swallowed a fishing lure, which was surgically removed at Busch Gardens before the bird was released back into the wild.

The club’s Instagram account (@ecseabirds) makes posts about education, information and updates about the club. Recently, they have partnered with Eckerd’s Office of Sustainability and Tampa Bay Watch, which aims to protect and restore the Tampa Bay estuary, to place more recycling tubes for monofilaments on campus, and club members can even get volunteer positions managing a tube. This entails monthly emptying and sorting of the hooks and lines disposed of in them, which are then taken to Sustainability Director Evan Bollier who delivers them to Tampa Bay Watch’s recycling program.

“I want to set the club up to continue successfully even after I graduate”, Thomas said.

For those who would rather stay inside and nerd out over the long gone past, the Ancient Studies History Club, formed at the end of the 2019 Fall semester, aims to enlighten students on the days gone way by. Having had one event where members went on a guided tour of the Museum of Fine Arts in St. Petersburg before the pandemic this February, the club has shifted to virtually holding discussions, movie nights and presentations on and about the ancient world.

“We try to bring people together a few times a month and just try to have a fun time,” club president Cat Harper said. “Most people in the club have only known us online so we all have an easy time with it.”

The club aims to have humorous and fun conversations about random things from ancient cultures, everything from what an “ancient vending machine” would be like to gory mythological tales.

Harper aims to have an in-person event once it is safe to do so, and to turn the club over to her vice president, Jackie Blither, once she graduates.

“I started this club and really tried to lay the groundwork for the next group to take over from me,” Harper said.

Blither plans to continue movie nights and museum trips, and would like to do an Ancient Greek Olympics, an idea she had before the pandemic.

“Like this semester, I'm thinking that every month is a new theme and adding some new activities like ancient cooking classes, ancient history guest speakers, and more,” she said. “It's always good to have some ideas going forward!”