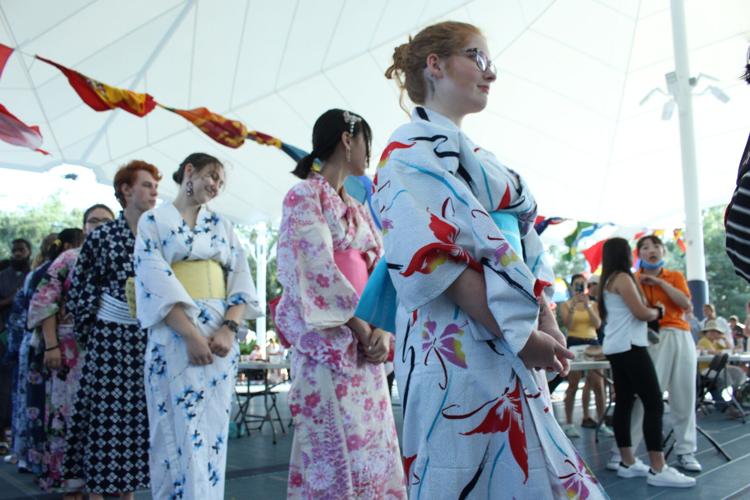 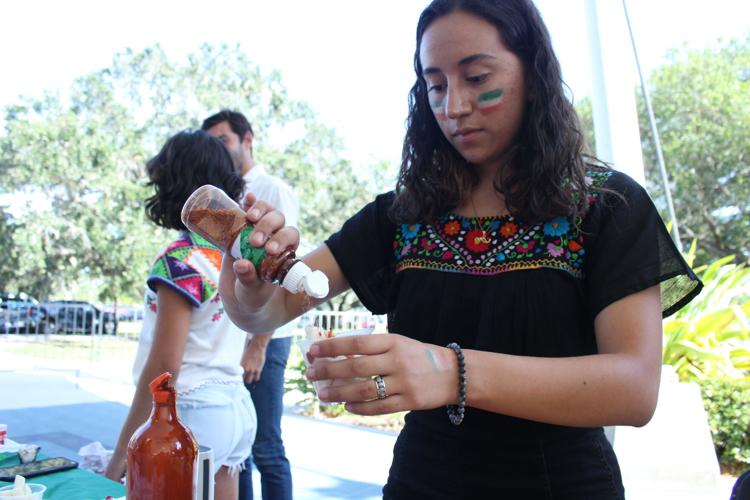 Cristina Lopez-Miranda sprinkles Tan seasoning on a cup of jicama and carrots. Lopez-Miranda from Mexico City and helped host the Mexico table at the Festival of Cultures.

Cristina Lopez-Miranda sprinkles Tan seasoning on a cup of jicama and carrots. Lopez-Miranda from Mexico City and helped host the Mexico table at the Festival of Cultures.

Walking into the GO Pavillion on the afternoon of Friday, April 22, the Eckerd community experienced a tradition of more than two decades. Twenty-one tables lined the outskirts of the pavilion, each representing a different country, setting the stage for Japanese traditional dancing, piñata breaking, Latinos Unidos dance lessons and cultural readings throughout the afternoon.

The Festival of Cultures tradition began before Director of International Student Services Olivier Debure started his position a little over 20 years ago. This was the first time the event could take place since 2019 due to the COVID-19 pandemic. Events like this one, also directed by the International Student Alliance, mean a lot to Debure.

“Personally, this is exactly why I love my job, seeing international and domestic students sharing food, customs and time together,” Debure said in an email.

Around the pavilion, students from countries such as Mexico, Denmark, Germany, Turkey, Puerto Rico, Hong Kong, Spain, South Africa, France and many more came together to share what they love about their heritage.

Close to the entrance of the event were Spain and Norway. Spain showed off a traditional seafood paella while Norway served Norwegian waffles with strawberry jam. Students with the ELS program also shared aspects of their culture, serving Japanese omelets, showing origami and writing peoples’ names in Japanese. In the background of the event, a Caribbean steel band performed for the crowd.

The blending and sharing of cultures is exactly why first-year student and President of Latinos Unidos Prech Potesik loves cultural festivals.

“I think it’s just really cool to share something that you’re really passionate about and love so much to other people,” Potesik said.

At the event, Potesik was running all around, taking part in running five of the tables: the table for the Latinos Unidos club, Colombia, Puerto Rico, the Dominican Republic and Nigeria. They also performed an original poem about Colombia early on in the festival while wearing a Dashiki, a traditional West African dress.

One thing Potesik found to be the most powerful was how an event like this could bring people together.

“Having [the festival] makes it easier for other people at Eckerd to find each other,” Potesik said.

Potesik has Nigerian heritage and, according to them, they had never met anyone else on campus that was Nigerian. But, setting up the table at the Festival of Cultures connected them to other students on campus who also were Nigerian.

At the Nigeria table, Potesik offered an array of traditional Nigerian foods, including a dough-like meal called fufu. But Potesik found that students were hesitant to try these foods.

“Chicken tenders are fine, but if it’s like grabbing dough and getting food, they’re like ‘oh my gosh, where’s the fork and the knife,’” Potesik said.

Despite this, Potesik found a lot of value in participating in the Festival of Cultures.